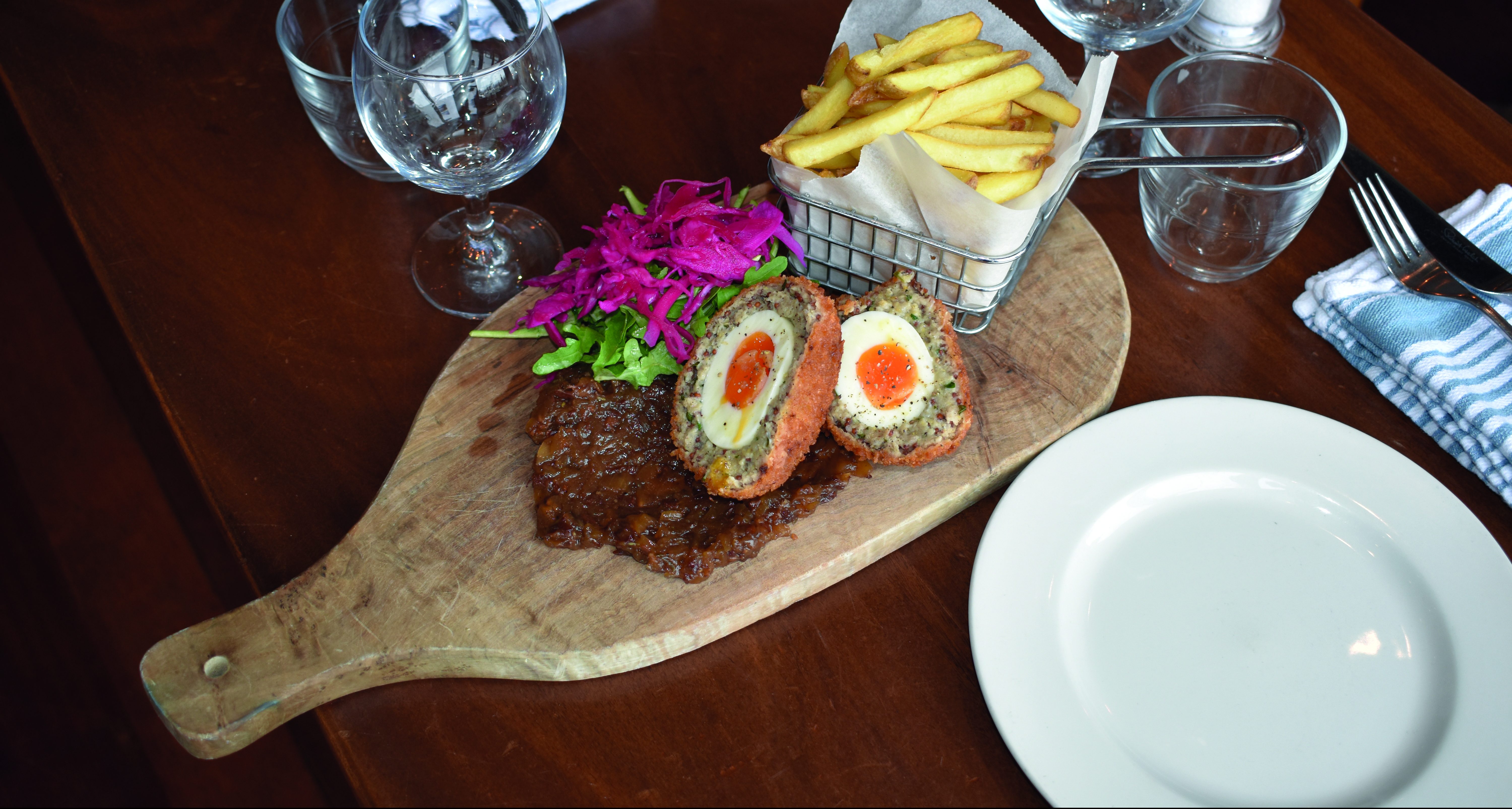 Runny eggs are now safe for all, as long as they are Lion. We have been working with chefs and venues across the country to help spread the word. Recently, we chose to visit Little Ships restaurant in Ramsgate, Kent. A restaurant themed around the Dunkirk rescue which saw allied soldiers brought back to safety. During our visit, we learned about the unique history behind the venue, what food safety means to Head Chef, Craig Mather and why using British Lion eggs in his cooking is of utmost importance.

One of the reasons this venue stood out to us is because of the interesting historical elements that owner James has seamlessly incorporated into the interior design of the restaurant, as well as the fact that most of their produce is locally sourced from within 30 miles of the restaurant, an area which includes both Kent and the Pas de Calais! Both of these factors have contributed to the restaurant’s success and we wanted to see this first hand and delve deeper into the concept behind the venue which suitably ties in with our safety theme.

The restaurant opened its doors in summer 2018 and has quickly become an integral part of Ramsgate’s restaurant offering. With stunning views of the harbour, the name of the restaurant pays tribute to the hundreds of ‘little ships’ that left from Ramsgate and other ports on the South Coast of England in the last weeks of May 1940 to rescue over 300,000 British and allied servicemen from the beaches of Dunkirk and bring them back to safety. In fact, opposite the venue, sits one of the last surviving ‘little ships’, the Sundowner. The owner of the Sundowner Charles Lightoller’s actions inspired the character of Mr Dawson in Christopher Nolan’s 2017 film, Dunkirk.

During our time at Little Ships, Craig showed us around and explained the rather unique décor to us. On display are pictures, books and photographs of the evacuation, including a uniform worn by James’ grandfather who was safely rescued from Dunkirk himself on 30th May 1940. The display also features medals that James discovered in the pocket of the uniform before having it dry cleaned to be put on display. This gives the venue a personal and intimate feel, almost taking visitors on a journey through time and allowing them to experience a key moment in history whilst providing customers with classic and timeless dishes.

The restaurant’s menu has something for everyone and the family-friendly atmosphere has definitely solidified the venue’s success. Interestingly, Little Ships are the only restaurant in the UK to offer famous Northern French artisan beer and cheeses such as the White Blanche de Wissant Beer, the unique Dome de Wissant and also the Camembert du Boulonnais. Once again, adding to the uniqueness and popularity of the venue.

As part of the purpose of our visit was to talk about food safety and British Lion eggs, we decided to go for the Homemade Scotch Egg with Bacon Jam (which Craig tells us is one of the most popular dishes on the menu!) and the Eggs Benedict. Both dishes went down a treat and after this, we sat down with Craig to chat about him, the inspiration behind some of the dishes on the menu and how he ensures food safety measures are always met in his kitchen.
About the venue

Salmonella. It’s a word that strikes fear into any chef, restauranteur or patron. Put simply, it’s food poisoning. The last thing anyone operating a venue would want to risk a chance of bestowing on their customers.

The salmonella outbreak in the United States last month, July 2019, which left near 1000 people hospitalised and caused two deaths has once again drawn attention to salmonella. With regular salmonella outbreaks occurring across the world on a regular basis and eggs often being at blame, it may be surprising to know that any egg containing the British Lion symbol is virtually guaranteed to be free of salmonella.

It was even announced in 2017 that pregnant women, children and the elderly can now enjoy runny eggs with no risk to their health, as long as they are Lion marked. Whilst this doesn’t guarantee the United Kingdom is salmonella free, the scheme has effectively eradicated salmonella in Lion eggs.

Salmonella is a bacteria that is a common cause of foodborne illness. Both humans and animals both harbour salmonella bacteria in their gut. However, stomach acid and ‘good’ bacteria typically destroy this before it has a chance to infect us.

How is it spread?

Salmonella can be found in a variety of animal produce. Cross-contamination is a problem so it’s important that you adhere to strict food safety practices and use food sources you know you can trust, such as eggs that are tagged with the British Lion stamp.

Our scotch eggs with bacon jam, rocket & pickled red cabbage are one of our most popular dishes. Perfect as brunch item, light lunch or a starter. It showcases a soft boiled free range local egg encased with sausagemeat flavoured with wholegrain mustard and herbs, then breadcrumbed in panko breadcrumbs.

What made you want to become a chef?

As a child I cooked regularly with my grandmother. Then from the age of 13, all I wanted to do was be a chef. I had a real passion for it. I learnt at Thanet College and also spent five years teaching there.

What are your views on food safety?

Health & safety is our absolute number one priority. It really does not matter how good someone can cook, if you cannot comply with food safety then you should not be selling food to paying customers. This is why we choose to use British Lion eggs, because customer safety is paramount.

Why do you recommend using British Lion eggs?

British Lion eggs have strict guidelines to help prevent salmonella and vaccinate all hens against it. It would be silly for anyone, whether a home cook or a professional chef to use anything other than British Lion certified eggs. We use a local Kent Free Range egg producer which is British Lion stamped. With the British Lion tracker, you can trace your eggs to see where they’re from.