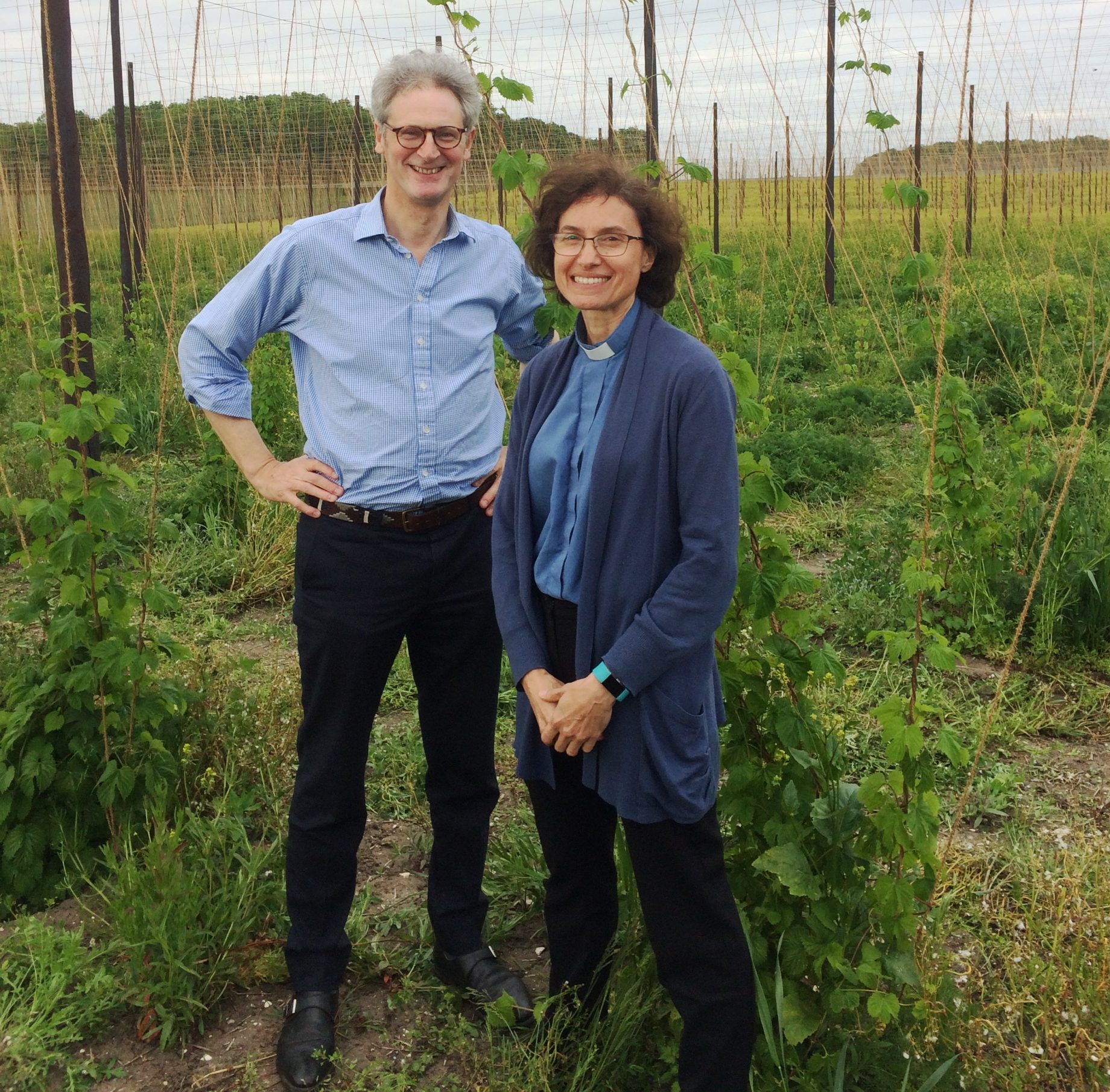 Surrey-based Hogs Back Brewery has celebrated the growth of its new hop garden with an official blessing by local vicar Rev. Claire Holt, attended by close to 200 local residents and customers.

The 8.5-acre hop garden next to the brewery on Manor Farm in Tongham, was created late last year, when Hogs Back relocated 2,000 hop plants from its previous site across the road and added 4,000 new ones. The new garden is almost treble the size of the old one and the hop plants are now beginning to flourish in their new home, growing up posts and wires ahead of harvest later this year.

Blessing the hops, Rev. Holt, of St Paul’s Church in Tongham, explained the origins of crop blessing ceremonies, which were traditionally held on Ascension Day – falling this year on 30 May, which was when the Hogs Back blessing took place.   She said: “When the crops were planted, a group of young and old people from the village, usually led by the priest, would walk round the boundaries of the parish, stopping at each boundary post to pray for the protection of the crops.

“Blessing the hop garden therefore revives a long-held tradition that would certainly have been part of the cycle of hop growing in Farnham for many years. It gives me great joy to lead today’s prayers for the Hogs Back hop garden, the brewery, and all who work in them, for this year and long into the future.”

Rupert Thompson, Hogs Back Brewery managing director, said: “Ever since we planted our first hop garden five years ago, we’ve been keen to observe hop farming milestones and were delighted to welcome back Rev. Holt, who also conducted a blessing for us in 2014.

“Today’s celebration was a much larger affair, which shows the extent to which the community has engaged with the hop garden and the brewery in that time. Hogs Back’s values of tradition, authenticity and local community appeals to a growing number of craft beer drinkers, across Surrey and beyond.”

With the hops duly blessed, the Hogs Back team led by estate manager Matthew King, will now be tending the bines carefully to encourage a healthy harvest in September. Three varieties are being grown in the new garden: Fuggles – used in the brewer’s flagship TEA ale; Cascade – used in its Hogstar Lager; and Farnham White Bine – a local variety that they have revived from near-extinction.

King said: “We’ve learned that the first harvest from a new hop garden is never the best, as it’s good practice not to cut all the new plants in Year 1, leaving them in the ground to grow stronger for subsequent years.   However, we’re pleased with the way the hop plants transported from our old garden have adapted to their new home so are hoping they will yield a good crop in September.”

As well as expanding its hop garden, Hogs Back is also planning to build a new kiln to dry its hops, next to the brewery. This is believed to be the first traditional style kiln to be constructed in Surrey for over 100 years and will stand on the site occupied for many years by an original kiln within Manor Farm. It will be used to dry Hogs Back’s hops for around one month and for the rest of the year will serve as an event space and visitor centre, educating people about the local hop farming industry.

Thompson said, “We are excited about continuing the journey we started with the planting of our original hop garden in 2014. Growing our own hops has made us better brewers, as with each harvest we’ve learned more about how the flavour of the hops is affected by the weather, and how that then impacts the quality and taste of the beer. It has also drawn us closer to the local rural community and its history, and gives us a unique opportunity to accentuate the provenance and quality of our beers.”