Old Mout, one of the UK’s most sustainable ciders and the world’s leading independent conservation organisation, the World Wildlife Fund (WWF), have joined forces for a brand new campaign, which will help to protect half a million acres of habitat around the world.

The partnership is the next chapter in Old Mout’s sustainability agenda, which has already seen the New Zealand-born cider help protect its native country’s national icon, the kiwi, that sits proudly on all Old Mout packaging. The status of the quirky kiwi has now improved from ‘endangered’ to ‘vulnerable’ after the cider maker found out that just one in twenty kiwi chicks survived to adulthood. Old Mout has now set its sights further afield with an ambitious goal – teaming up with WWF in a partnership to help protect animals’ natural habitats across the world, including the continued conservation for the kiwi.

The ad stars the adventurous little kiwi who, once endangered himself, sets out on a journey to help protect other animals’ habitats. He meets the WWF panda on his travels and together they enthusiastically announce the partnership, resolving on a striking visual of endangered animals circling the world.

This marks the beginning of a summer-long integrated campaign for Old Mout, which is now the fastest growing premium flavoured cider in the UK. The campaign communicates a serious message in a proactive and enjoyable manner, which has proven effective with millennials and the growing Gen-Z. 2019 will see Old Mout’s biggest ever media presence, festival activation with the return of the Kiwi Camp at the Isle of Wight Festival and, for the first time, Boardmasters, as well as on-trade activation in over 1,500 pubs, where a 30p donation to WWF will be made for every bottle purchased. 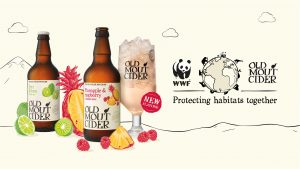 Emma Sherwood-Smith, Cider Marketing Director at HEINEKEN, said: “Our ambition is to lead the way as the most sustainable cider – setting the standard to help protect our planet. Our partnership with WWF acknowledges the work we’ve done so far for the kiwi in New Zealand and our success in making our cider and packaging the most sustainable it can be.

“Seventy-five per cent of consumers actively look for environmentally conscious brands and we’re proud that our distinctive brand purpose, coupled with WWF’s fame, will help communicate the urgency in the efforts needed to help save our planet.”

Naomi Hicks, Director of Partnerships at WWF, said: “We are the first generation that knows we’re destroying the planet and could be the last that can do anything about it. Partnerships like this one are essential if we’re to halt and reverse nature’s decline. That’s why we’re delighted to be joining up with Old Mout to protect vital habitats like the Amazon. We’re looking forward to working together to inspire millions to join the fight for our world.”

Old Mout is available on every High Street in the UK, and is outperforming the category and competition as the fastest-growing premium flavoured cider in volume and value. In 2018, Old Mout delivered +34% value share growth and boasted the strongest rate of sale in the premium flavoured cider category. Exotic flavours are increasing in popularity within the premium flavoured cider sector, driven by a younger generation looking for sessionable fruit ciders in original, unique flavours. To capitalise on this growth, Old Mout launched its new Pineapple & Raspberry variant in March 2019 – set to be the next big thing, especially with pineapple going head to head with avocado as the UK’s fastest-growing tropical fruit.

To find out more about Old Mout Cider and WWF’s partnership and learn about habitat loss and its devastating effects on endangered wildlife and how to protect it, visit www.oldmoutcider.co.uk/wwf