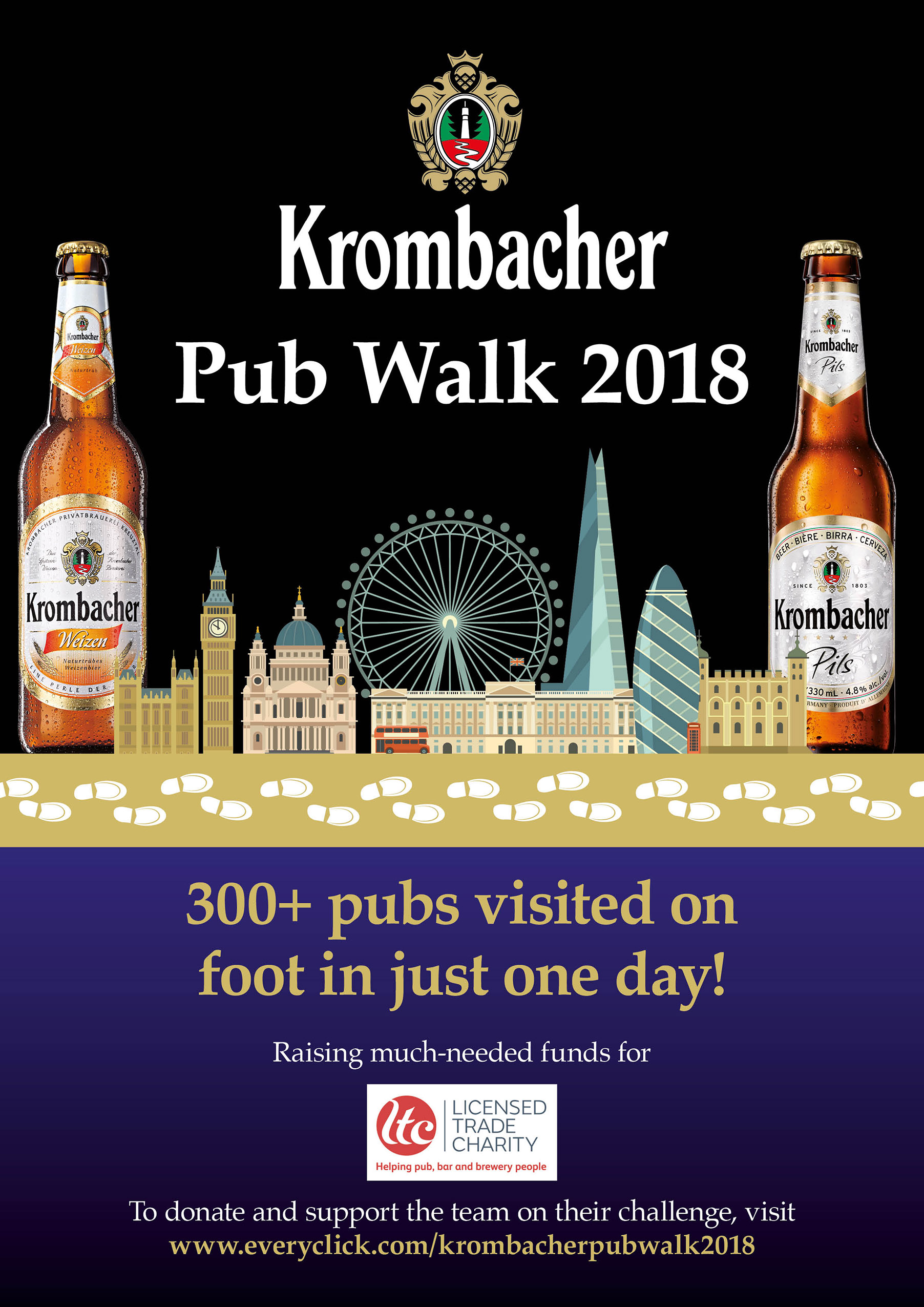 Germany’s number one premium beer brand Krombacher has announced an inaugural Krombacher Pub Walk campaign, which is looking to increase awareness about the plight of British pubs and in the process raise money for the Licensed Trade Charity.

The mammoth challenge taking place in London will see a Krombacher team cover in excess of 30 miles as they aim to visit 300 pubs on foot in 24 hours.

The fundraisers will begin on Friday 16th November and will be raising money in aid of the Licensed Trade Charity, which for the past 200 years has been helping people who work or have worked in pubs, bars and breweries when they are in need.

To donate and support the team on their challenge, visit www.everyclick.com/krombacherpubwalk2018

Research by the Campaign for Real Ale revealed earlier this year that around 18 pubs are being forced to close in the UK each week and the organisation is calling on the Government to do more.

“It’s a shocking statistic and incredibly sad that so many pubs are being forced to close each week. If our challenge can generate some noise around this and at the same time raise money for a charity that carries out incredible work in the pub, bar and brewery sectors, then it will most definitely be worth it.”

“Fundraising for the Licensed Trade Charity can make a real difference to people’s lives. The grants that we provide to pub, bar and brewery people in times of hardship can cover such items as rent and deposits for accommodation, bills and furniture. All money raised helps us to support those in need”.

In the last two years, Krombacher been extremely active in supporting and raising money for pub causes around the UK.  Over £2000 has previously been raised to date for Pub is The Hub.

In 2016, two UK team members ran the Krombacher sponsored Frankfurt Marathon and Stephan Kofler walked the SÜDTIROL SKYRACE for charity – a 69km, 13,000 ft climb which he completed in 16 hours and 55 minutes.

The money raised has been used on a variety of pub projects including providing the Stoke Canon Inn near Exeter with a projector and screen for community events, plus assisting the School Boy Inn in Norton, South Yorkshire, with the launch of a community shop.

The Licensed Trade Charity provides valuable support to those who work, or have worked, in pubs, bars and breweries. This can take the form of financial support, along with a dedicated free helpline providing advice on health, mental health, housing issues, debt and relationships, and can also provide up to six counselling sessions for those in need. Other services include telephone befriending to combat loneliness in former trade workers, and retraining grants.

In 2017 8,300 individuals benefitted from its charitable services, with £982,000 provided to those in need through social and educational grants for such items as rent, furniture and white goods. 385 people called the Licensed Trade Charity’s free telephone advice service in 2017, and over 60 information sheets are available on the charity’s website to give people support and advice on a range of issues.

Krombacher beers have been produced exclusively in the small town of Krombach, nestling in the beautiful Siegerland Hills of Westfalia, central Germany since 1803, adhering to the German Beer Purity Law of 1516 (Reinheitsgebot).

Relying on artistry, experience and above all passion, Krombacher’s 55 Master Brewers ensure no corners are cut in their pursuit of perfection.

Combining time-consuming methods of the traditional German brewers with state-of-the-art technology, the brewery only uses the best, 100% natural and wholesome ingredients including the finest two-row summer barley, Siegel hops from Hallertau and its own specially cultivated yeast.

For the precious water, Krombacher beers benefit from the local Felsquellwasser® found in 48 wells within 3km of the brewery. The special water is especially soft and low in mineral content making it perfect for brewing.

The proudly independent, family-run brewery has achieved consecutive year on year double digit UK sales growth since 2012 with over 300 draught taps now in operation in the UK.

Success in the ON-trade for its comprehensive draught, bottle and can offering plus it’s low/no alcohol range, has also bolstered OFF-trade sales with the brand now listed in Booths, Majestic, Morrisons, Ocado and Tesco.