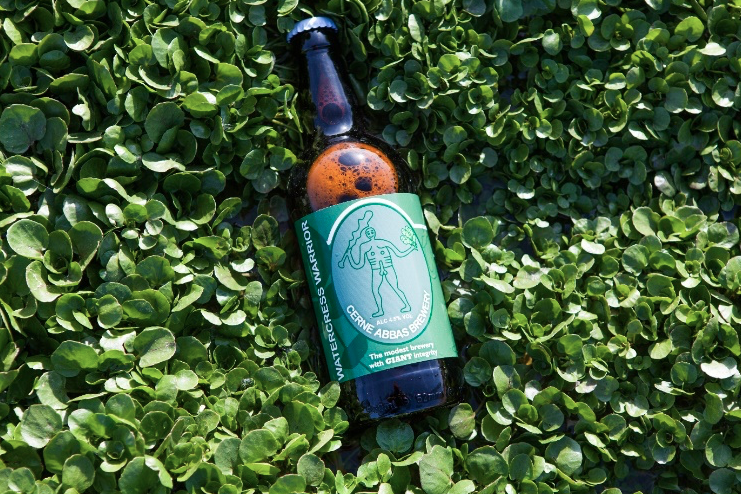 The Watercress Company are always keen to find new and ingenious ways to work with watercress so when the Cerne Abbas Brewery approached them back in early 2017 to help develop a limited-edition watercress inspired ale, they jumped at the chance. Watercress Warrior was duly born – a brand new limited-edition craft bottled beer to celebrate the start of the UK watercress season.  Little did they realise what a hard-core pour had been created and how a year on it would beat stiff competition winning acclaim amongst CAMRA and beer aficionados.

The beer itself is a 4.5% ABV light and floral Pilsner style craft ale which features watercress seed as its key ingredient to provide the unique peppery flavour. In addition, the beer is made using 1000 litres of spring water taken from the natural mineral rich springs used to grow watercress at the company’s farm in Waddock, Dorset. Special Flyer hops selected from the British Hop Institute’s experimental variety programme and not yet commercially available were used to complete the ingredients. The result is a delightfully hoppy brew with a refreshing citrus bite which contrasts deliciously with the peppery hit of the watercress.  But there’s a rumoured additional benefit to the inclusion of watercress…..that of boosting your sex drive….which simply stiffened The Watercress Company’s resolve to be involved.

Cerne Abbas Brewery is named after the huge naked chalk figure carved into the nearby Dorset hills which many reckon to be an Iron Age fertility symbol. The ancient festival of Beltane, better known now as May Day has fertility as its central theme; it’s the time when the earth is reborn. Every year local revellers including Morris Men and employees of Cerne Abbas Brewery take part in the celebrations at the ancient carved figure to welcome the dawn. In 2017, however, they discovered they’d been beaten to the site and that magically the giant was clutching a handful of watercress in his left hand – just like on the Watercress Warrior label.

At the end of the 2017 May Day celebrations the Giant was rewarded with a glug of Watercress Warrior to pep him up and promote good luck and fortune. It seems to have paid off – Watercress Warrior has gone from strength to strength; initially made as a limited edition bottled beer for sale at the 2017 Watercress Festival, the Brewery and the beer featured on the BBC’s Saturday Kitchen, and Radio 2’s Simon Mayo Show, made headline news internationally for its rumoured Viagra-like effects – and continues to do so today with renewed vigour as fresh publications and websites are pronouncing on its virtues.

The success continues in perhaps more serious circles too with Watercress Warrior having been highly commended at this year’s Taste of the West Awards before appearing in draught form for the first time at CAMRA’s Great British Beer Festival in London where it was enjoyed by the crème de la crème of beer aficionados.

Tom Amery, MD of The Watercress Company says: “What a performance! Keep it up, we say! We’re delighted that what was created as a one-off experiment to see how watercress seed might work in a beer has really taken off. The success of the beer for the Cerne Abbas Brewery is great to see and the prospect of Watercress Warrior being available on tap is mouth-watering! We always knew that watercress was versatile but to find an alternative application for the watercress seeds just shows what a little imagination can achieve.”

But it’s not just beer to which watercress adds its peppery piquancy. The Watercress Company also works in collaboration with The Winchester Distillery, providing fresh watercress straight off the farm as a crucial botanical ingredient in Twisted Nose gin. The name nods recognition to the Latin word for watercress – nasturtium – but also the legend that ‘twisted nose’ was the nickname given to watercress in ancient times because it described the face people pulled when they ate it thanks to the punchy, peppery hit. It made the perfect name for a gin in which watercress is a key component.

Tom again: “The applications for watercress seem endless. Either by virtue of its distinctive and unique peppery taste or its known health benefits, watercress is extremely versatile and I find it really exciting to explore interesting and unexpected ways for us to reach different markets.”

To find out more about watercress and The Watercress Company visit: www.thewatercresscompany.com