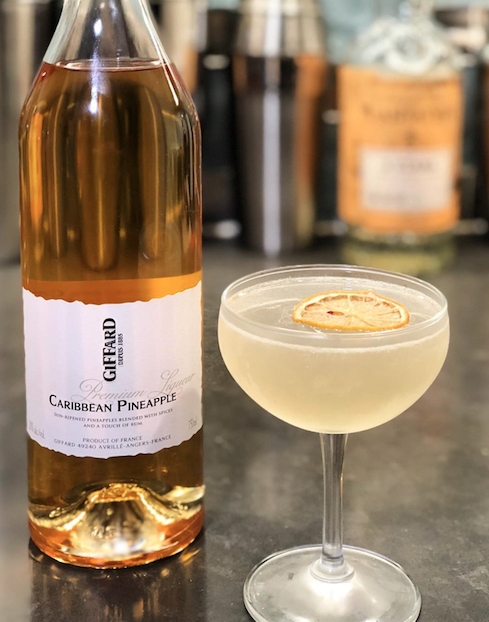 Noticing a gap in the market for a high-quality pineapple liqueur, Giffard released Giffard Caribbean Pineapple in June 2017 to much praise from bartenders around the world. The infusion is made using both fresh and candied pineapple. When macerated with 7-year-old Caribbean rum, the resulting liqueur has a strong fruity flavour and nose, with noticeable hints of caramel. Neither treacly nor overpowering, its sweet, slightly smoky taste makes it ideal for both professional and amateur cocktail aficionados looking to complete their bar collection.

Doubling Down on the Daiquiri

The Daiquiri occupies an established, if uncertain place in the bartending canon. All are expected to master it before venturing into more experimental, craft territory. And yet in more discerning cocktail lounges, daiquiris tend to get snubbed in favour of their more respectable brethren (the Sidecar, the Manhattan, the Old Fashioned). But to dismiss the Daiquiri as frivolous, fruity slush is to misunderstand its true nature—and in honour of recent National Daiquiri Day, it’s time to restore this iconic summer sour to its former glory.

The Daiquiri’s origins go back not to backyard barbecues and blender-bartended hen-dos, but to the iron mines of Daiquirì, Cuba, where an American engineer named Jennings Stockton Cox invented it in 1898. How Cox came up with the recipe is unclear (historical rumour says he mixed it up in a mine with the only ingredients he happened to have on hand; his granddaughter claims he was only trying to blunt the effects of Cuban rum on his hapless American dinner guests). In any case, the cocktail stuck and was subsequently christened ‘Daiquirì’ in honour of its birthplace. Eventually, it made its way to the United States by way of the Army and Navy Club in Washington, D.C., where supposedly, a young naval officer named John F. Kennedy first tried it in the 1940s. Years later, he’d name it his favourite drink.

In later decades—perhaps owing to too many slush-machine knockoffs—the Daiquiri’s prestige dipped. A shame to those familiar with its pure form, like Simon Difford, founder of the drink-lovers bible Difford’s Guide, who in 1997 set out on a quest to find a recipe that would help redeem the Daiquiri’s good name. Twenty years and more than a thousand daiquiris later, Difford finally laid down his own iterations of the drink: one classic (10 parts rum, 3 parts lime juice, 1 part sugar), and one variation using tiki bitters and Giffard’s Pineapple Liqueur. The recipe for the latter is below, along with a slightly more minimalist version from drinks writer Matt Pietrek, author of the Cocktail Wonk blog (www.cocktailwonk.com). In his words, “Today, many people love fruit-forward Daiquiris. However, they’re usually done with purees or juices. That can be hard to do with fresh ingredients in all situations. With Giffard’s great fruit flavours, I can replicate a fruit-forward Daiquiri anytime, anywhere.”

How to make both: