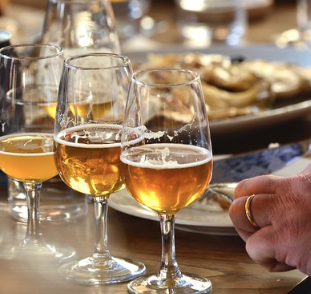 This one-off dining experience at London’s exciting new restaurant BRAT showcases the natural affinity between the full flavours of American craft beer and seasonal British produce, cooked on an open firewood grill. The creative, new flavour combinations will demonstrate the versatility of beer with food in a bid to encourage the industry to place more emphasis on beer and food pairings. 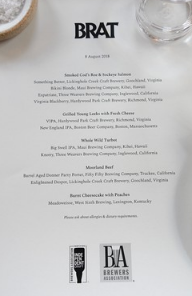 Brewers Association Executive Chef, Adam Dulye, in collaboration with BRAT Head Chef  Tomos Parry, have devised an exploration of flavour matches (see attached menu) that show what beer and food can do together.

Dulye comments:  “One of the goals with beer and food pairing is to broaden the conversation about quality, about a sense of community and a sense of place, ie. the ethos of small and independent American brewers.  Collaborating with a restaurant like BRAT that has the same independence and ethos, strengthens the relationship between the brewery and the culinary side and it helps the consumer understand about what goes into the glass and what goes onto the plate.

“The beer and food landscape are shifting and we’re seeing more and more consumers seeking out an experience when they go out.   They’re looking at where they want to go and what they’re going to eat, drink and do when they get there. In a lot of cases, this involves American craft beer and consumers are seeking out places that stock these types of beers.”

The following American craft brewery representatives have travelled over from the States to support the event:

Lotte Peplow, Brewers Association representative for UK/Europe adds: “The UK is the second largest export market after Canada with 10.5% of all exports, up 7.1% in 2017.   At a time when the UK beer industry is more buoyant and dynamic than ever, why is growth happening and what’s driving demand for American craft beer in the UK.

There are three reasons:

The Brewers Association Export Development Programme (EDP) aims to generate exposure for American craft beer overseas through trade shows, festivals, seminars, media outreach and beer competitions, amongst other activities.   There are approximately 100 small and independent breweries within our EDP  by our estimates and 27-30 EDP members active in the UK.

Last year the Brewers Association launched the new Independent Craft Brewer Seal to differentiate small and independent craft brewers from ‘big’ multinational brewers. It features an iconic beer bottle flipped upside down to capture the spirit with which craft brewers have upended beer while informing beer lovers they are choosing a beer from a brewery that is independently owned.   Based on recent data, more than 90% of consumers surveyed showed interest in the seal and what it stands for.  (Source: SRG AAU 2017)

Additionally, beer drinkers who have been exposed to the seal demonstrated a 24-point lift and 77% increase in being more likely to prioritise beer from independent breweries. (Nielsen).  Since launch last year the Brewers Association Independent Craft Brewer Seal has been adopted by nearly 3,500 breweries representing more than 75% of craft beer volume!

The CraftBeer.com Beer & Food Course, the definitive course for elevating beer and food pairings is available to download, free of charge, here: https://www.craftbeer.com/food/beer-and-food-course/craftbeer-com-beer-food-professional-course-resources