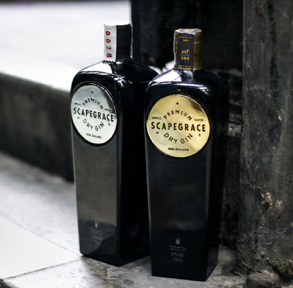 Building on its reputation as the rogue of the spirits shelf, Scapegrace Gin is launching a cocktail competition with a difference. Bartenders entering the Anonymous contest will have to create a Scapegrace cocktail recipe that will be made for the judges by another bartender.

With the entrants remaining anonymous until after the judging, the competition has been launched by Hi-Spirits, distributor of premium New Zealand gin Scapegrace, to put the focus firmly on the quality of the cocktail rather than the personality of the bartender.

Any bar stocking Scapegrace Classic Gin or Scapegrace Gold Gin can enter a cocktail recipe with a maximum of ten steps online. Entrants will be shortlisted on the basis of the originality of the drink, the appearance of the cocktail, and creativity based on their answers to two online questions about who they’d serve their drink to.

Regional winners will be invited to a Grand Final in London on 3 October, during London Cocktail Week – where they will see their drink being made for the judges. The identity of the winning drink’s creator will only be revealed once the judging is complete.

The prize for each regional winner also includes a one night, all expenses paid trip to London, with a plus one. This will include a tour of some of the capital’s best venues, along with dinner and drinks, hosted by Scapegrace Ambassador Josh Linfitt. The overall winner will get a Scapegrace goodie bag and tickets to see Fat Freddy’s Drop at the Brixton O2 Academy on 9 November as part of another VIP night out.

Dan Bolton, managing director of Hi-Spirits, said: “It’s just over a year since we launched Scapegrace in the UK, and it’s definitely lived up to its reputation as a Rogue in terms of its premium quality and mixability. There are plenty of cocktail competitions that put the focus on the personality and presentation skills of the bartender, so we’ve created the Anonymous competition to put the quality and originality of the cocktail itself at the heart of the contest.”

Coming from the Rogue Society Distilling Co, Scapegrace bills itself as the gin ‘from the bottom of the world’. Distilled in New Zealand using spring water sourced from the country’s Southern Alps, and botanicals sourced from around the world, the spirit is batch-distilled using a restored 19th century copper whisky still, with each batch individually numbered.

Scapegrace is a traditional word for a rogue or rascal, and the brand celebrates gin’s sometimes murky history with a black-tinted bottle, which has a shape based on an antique genever bottle. Alongside Scapegrace Classic, a 42.2% ABV complex, artisan dry gin which combines classic juniper and citrus notes with subtler floral and spice undertones, sits Scapegrace Gold, a 57% ABV Navy-strength gin with added tangerine flavour notes.

Full entry details for the Anonymous Cocktail Competition, including terms and conditions, can be found at www.hi-spirits.com/scapegracecompetition.