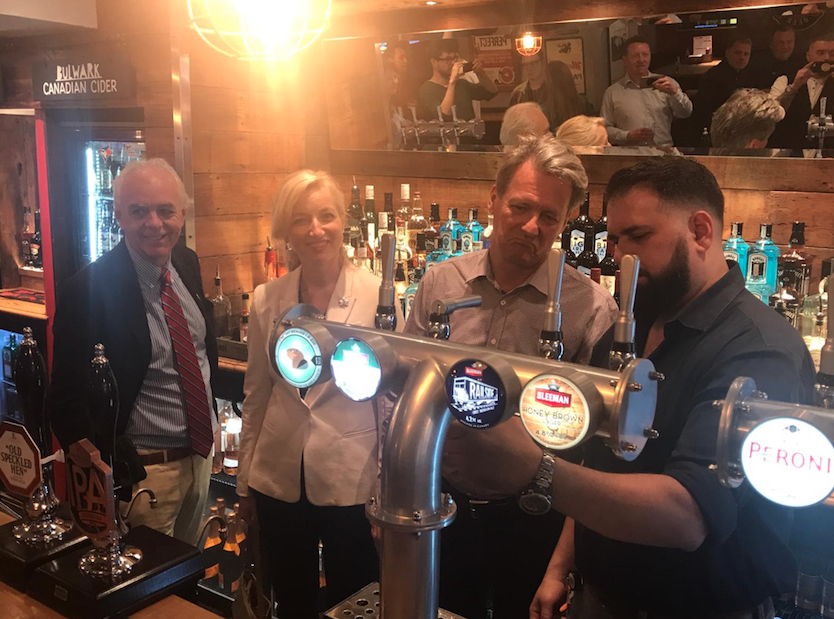 With Canada Day celebrations and the annual City BeerFest recently taking place, specialist beer importer Morgenrot has extended its selection of Sleeman brews with the addition of Silver Creek Lager.

To coincide with the launch, the iconic Canadian beer was available at the reopening of the Maple Leaf pub in Covent Garden, which was attended by John W Sleeman, as well as being on offer to visitors to the City Music Foundation’s annual City BeerFest event on July 5th.

Available in 30lt kegs, the new arrival joins the brewer’s other beers – Honey Brown and Railside – in the Morgenrot stable.

Sleeman Silver Creek Lager (5% ABV) – a golden colour with an ample white foam collar. A noble hop character is prominent, along with balanced malt sweetness. The perfect refreshment, this pilsner style has a very clean finish.

Morgenrot’s Sales Director Graham Archibald said: “As well as having a fantastic backstory to the brand and fanatical following in Canada, the Sleeman beers always hit the mark in the flavour department so the decision to extend our range with the Silver Creek Lager was a no-brainer really. Combined with Canada Day celebrations and the City BeerFest, we’re in the cusp on summer and lager-drinking weather so it’s the ideal time to launch this tasty tipple.”

Despite being Canada’s third largest brewing company, Sleeman retains a craft minded vision. The company dates back to 1834 when John H Sleeman arrived in Ontario from Cornwall where his family were previously pirates.

By 1851 he was supplying small 100 barrel batches from his third brewery in Guelph, Ontario, the location chosen for its pristine water supply. In 1933 the brewery closed, having been sold by the family whose liquor licence was revoked and who had to pay fines incurred for bootlegging beer for Al Capone across the US border during the prohibition.

John W Sleeman – the great, great grandson of John H – who had run an English pub in Canada and started a company importing world beers reopened the brewery in Guelph in 1985. Original brewing recipes have stayed within the family and these form the basis of Sleeman’s portfolio of beers.

Established in 1970, Manchester-based Morgenrot supply a sublime selection of wines, beers, ciders and spirits nationally including Krombacher, Quilmes, Windhoek, Tucumen, Tribaut, Loxarel, Supper Club and Vallemajor to name a few. With a core specialism in Spain, Morgenrot now has the finest range of Catalan, Basque and Spanish craft beers alongside the country’s on-trend wines, sherries, sidra and water.