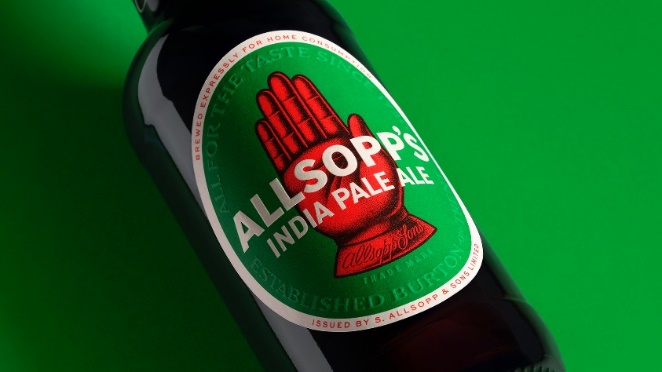 After sixty-two years in the wilderness, the infamous brewer Allsopp’s, once at the very heart of the British brewing industry, has returned. And boy, have they got a story – and a couple of beers – for you.

Jamie Allsopp, seven times great grandson of pioneering brewer Samuel Allsopp, isn’t just picking up where his ancestors left off. He’s fulfilling a lifelong dream of restoring the ales that made his family’s name, to their former glory. A dream of brewing beer that actually tastes like beer, for a generation thirsty for the real thing.

His secret weapon? The sole surviving ledger of his family’s recipes in existence. With the rest lost or destroyed, Jamie spent years hunting high and low to find them. But now, with Allsopp’s past secured, he turned to its future.

First, he enlisted the help of Burton-style brewing expert Jim Appelbee, who skilfully adapted the original recipes to work for today’s ingredients, methods, and tastes.

Next, the tricky task of finding Allsopp’s new home. But, when Jamie walked through the doors of Mark Simmonite’s hand-built brewery in Sheffield, he knew he’d found the place. Working together closely, Jim and Mark tinkered away with different malts, hops and brewing techniques, until they’d cracked Allsopp’s comeback brews.

Jamie’s forebears dedicated themselves to perfecting their Pale Ale. Balanced, golden-hued and almost dangerously drinkable, this was the beer that made their name. And perfect it, they did.

Fortunately, going the extra mile in pursuit of brewing excellence is one family tradition Jamie is more than happy to keep up. Which brings us to this contemporary take on an eighteenth-century classic: crisp, sessionable and insatiably refreshing.

Pale Ale Tasting Notes:  Pale gold and bright, with light bready, cereal and citrus notes on the nose. On the palate, a perfect balance of juicy hops moreish biscuit body, with a dry finish that will have you reaching for another sip before you know it.

Available in 500ml bottles and cask.

Try it with: classic British fish and chips!

Samuel Allsopp was a true original. One of life’s great innovators, he hand-built a brewing business that embodied his pioneering spirit. The rocket fuel for that success? A little beer called India Pale Ale.

Samuel was one of the first to brew this now world-infamous beer. In fact, legend has it, that he brewed his very first batch in a teapot. Whatever the truth, from those humble beginnings Allsopp’s and India Pale Ale became synonymous, travelling all over the globe.

It’s only fitting then that some 200 years later, Jamie would be the latest in a long line of ancestors to make it their own.

Now, Allsopp’s invites you to savour a faithful recreation of the original Burton IPA – the complex, beguiling inspiration for one of the most popular and enduring beer styles, the calling card of the craft beer revolution.

India Pale Ale Tasting Notes: With the added benefit of better malt and hops than Samuel had at his disposal, this recreation is darker and clearer than most modern IPAs. Malt and hops combine on the nose to create notes of fresh hay, citrus and dark fruit, with a hint of caramel. On the palate it’s rich and rewarding, with grass and spicy notes playing off a light toffee-like base, before a dry, lingering finish

Available in 500ml bottles and cask.

Try it with: mature farmhouse cheddar

Floods. Fires. Truly epic financial ruin. Giant zeppelins. You name it, Allsopp’s has been there, done that, and brewed the beer. And now, we’re back. All for the taste. And open to anyone and everyone, who’s ready to #ASKFORALLSOPPS.

“Allsopp’s is for everyone: the new generation of beer drinkers who may be lost or overwhelmed by choice, as well as fans of traditional, classic British ales,” comments Jamie. “Like our history, Allsopp’s beers have layers and depth. But above all, they’re beers made with good ingredients, skill and heart. Beers for people who like beer. So, whilst we respect the best of the past, these ales are still true originals, embracing innovation, bold, contemporary design and modern culture, for modern beer lovers.”