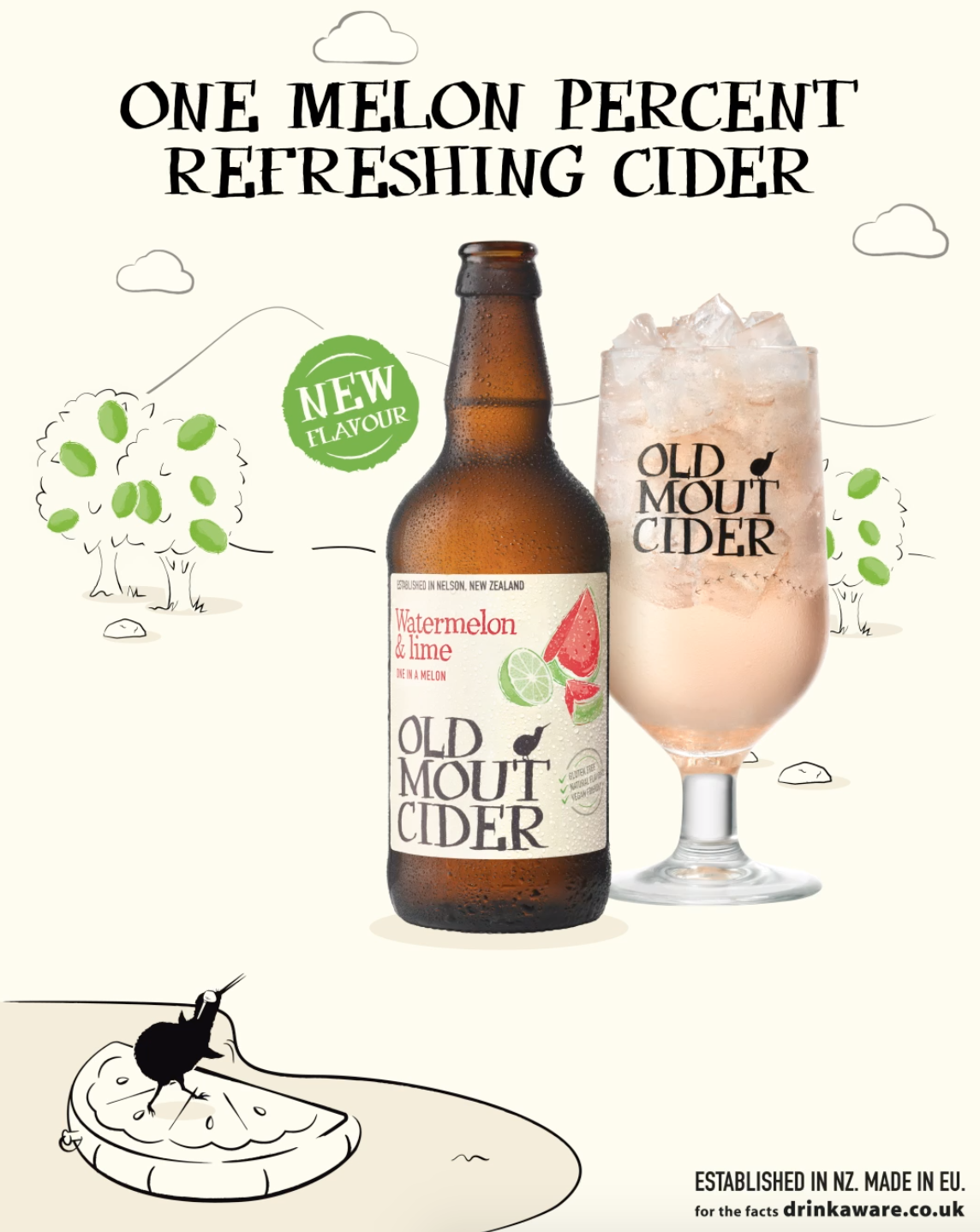 New Zealand-born cider brand, Old Mout, has brought a juicy new flavour to the cider category, with the launch of Watermelon & lime in the on-trade

Following the successful launch of Old Mout’s most recent innovation Pineapple & raspberry, which is now the second biggest selling premium flavoured cider in the on-trade and is worth £12M in the on trade alone, HEINEKEN UK is bringing its latest fruity innovation, Watermelon & lime, to pubs from April – in time for the spring and summer months.

Within the premium flavoured cider category – worth over £400M in the on trade, unique new flavour combinations are increasing in popularity, driven largely by a younger generation looking for exotic tastes. New Old Mout Watermelon & lime taps into this demand, scoring exceptionally highly in consumer taste tests, with 70% saying that they ‘would definitely buy’ the cider. With a refreshing watermelon hit and zesty lime finish, Old Mout’s new flavour contains the same 4.0% ABV as its other variants and is made from natural flavours, is gluten free and vegan friendly too.

The new and refreshing blend capitalises on watermelon being the third most popular fruit globally and is guaranteed to be a hit in 2021, offering operators and consumers alike a taste of summer in a bottle. What’s more, Old Mout Watermelon & lime will be the brand’s lowest sugar recipe to date!

Old Mout has been the fastest growing cider brand in the on-trade over the last five years, continuing to grow despite Covid-19 and pub closures.  Mindful of its impact on the planet – Old Mout has an ongoing partnership with the World Wildlife Fund (WWF) to protect half a million of acres of habitat around the world. Old Mout over indexes with 18-34-year-olds who prefer to buy brands that have a social and environmental commitment.

Supporting the launch will be an extensive digital media plan on Facebook, Instagram, Snapchat and YouTube throughout the summer, as well as support for the trade with bespoke point of sale launch kits. To drive trial, the new variant is set to be poured at multiple festivals this year, including Isle of Wight Festival and Boardmasters, alongside a summer sampling campaign with Deliveroo.

“In 2019, our Old Mout Pineapple & raspberry launch was an outstanding success and we’re ready to do it all over again with the arrival of our new Watermelon & lime flavour,” says HEINEKEN UK Cider Marketing Director, Rachel Holms. “Enjoying a flavoured cider over ice in a pub garden will be a huge pull for customers returning to the on-trade, so our latest innovation – with its  dynamic flavour combination and exceptional consumer taste test results – is the perfect option this summer.”

Old Mout Watermelon & lime is available in a single 500ml bottle and is best served over ice with a wedge of lime.