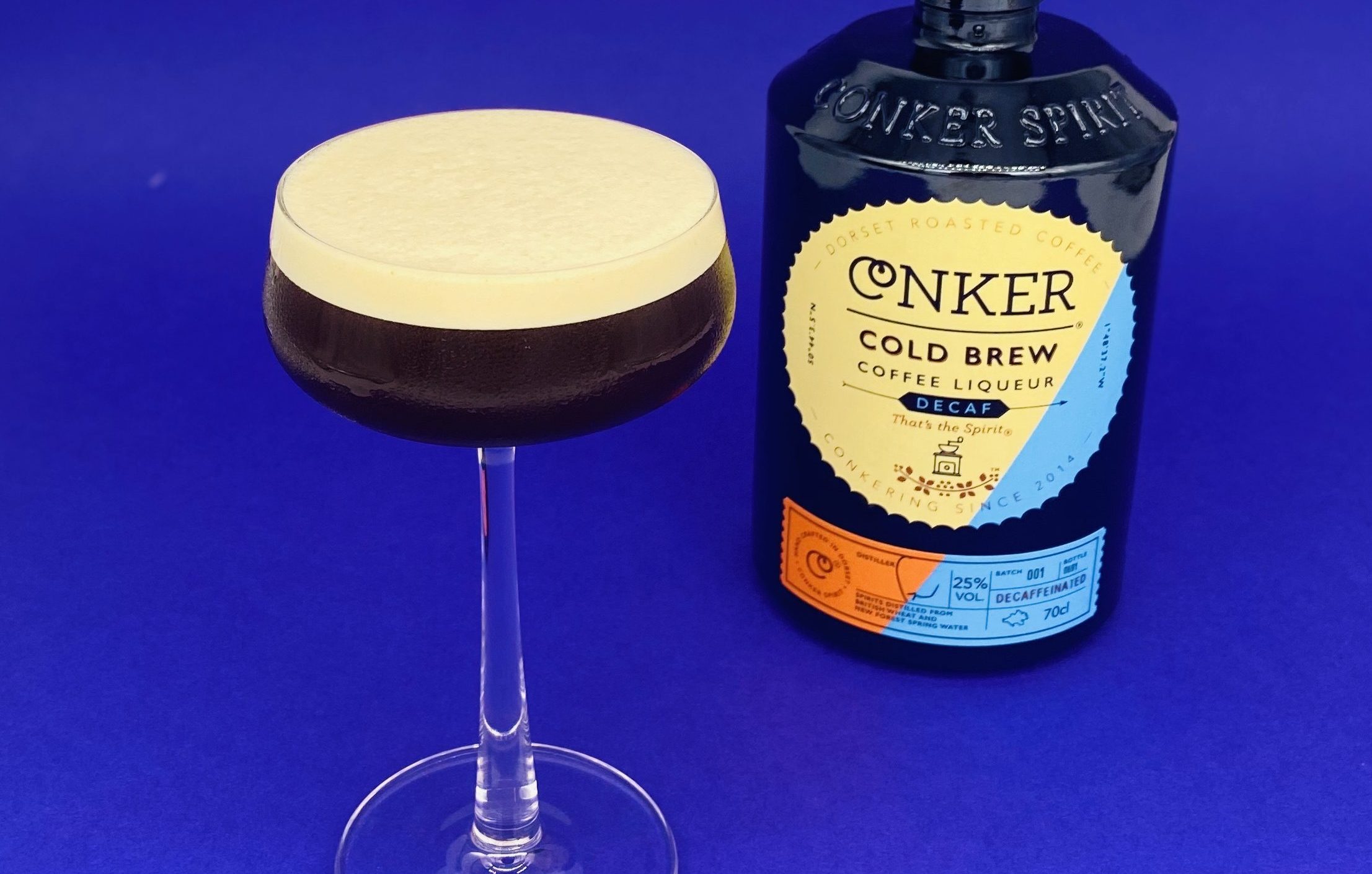 The perfect one-bottle solution for a flavoursome decaf espresso martini at home or in a bar, the new Conker Decaf Cold Brew Liqueur is made with speciality decaf coffees from Brazil and Columbia, meaning you only need ice.

For a no fuss, flavour-rich decaf espresso martini, you simply need 70ml Decaf Conker Cold Brew, 30ml water, ice and a good old shake. The new product has an abv of 25% and is available to the trade in a 70cl bottle, in a case of six for £108.

When Conker Spirit launched their Cold Brew Coffee Liqueur in 2016, they redefined the market. Far from the mass-produced coffee ‘flavoured’ liqueurs that we had come to expect, Conker’s was the real deal using Grade 1 forest grown speciality Ethiopian and Brazilian coffee, a touch of demerara sugar, and distilled British wheat spirit. The response was extraordinary. With just three ingredients, Conker became leaders in premium craft coffee liqueur, winning numerous UK and international awards.

Now, after two years scouring the globe for the finest coffee growers, Conker Spirit has now duly delivered their exquisite Decaf Cold Brew Coffee Liqueur, made for those who love real coffee, but not the buzz.

Made from speciality Columbian and Brazilian coffees, their Decaf Cold Brew Coffee Liqueur has all the depth and dynamism of the original recipe, whilst bringing in new and intriguing flavour profiles unique to the Mogiana and Tolima coffee regions.

“Sweet, well-balanced and with notes of orange and grape, this new Decaf Cold Brew Coffee Liqueur ensures the beautiful coffee we’ve spent years discovering is not diminished by the decaffeinating process. The coffee is decaffeinated in Germany using a highly technological process involving carbon dioxide, which is a natural and highly selective solvent, ensuring the aromas in the coffee are preserved while the caffeine is removed. It’s been a long process to get to this point but we’re delighted to launch and are confident its robust character, depth of flavour, ease of use and sleep benefits will make it a huge hit for those who love an espresso martini but don’t want to be up all night!”

“Conker continue to set the standard when it comes to British innovation and quality in the spirit sector. This product is incredibly unique and from enjoying an espresso martini myself, I know there are plenty of people out there who will see the decaf benefits. We think this will be huge so are excited to get it out to the trade.”

Set up by Rupert Holloway in April 2015, Conker was Dorset’s first gin distillery, has sold over 200,000 bottles around the UK and recently launched in Canada with the LCBO earlier this year.

After spending his younger years studying and working on building his CV, including time at university studying Biology and then a Masters in construction, Rupert began his serious working career as a Chartered Quantity Surveyor, but pretty quickly realised something was missing and that his real passion lay elsewhere.

With craft drinks on the rise, Rupert started to research distilling and began foraging on the cliff tops of Bournemouth. At aged 29 he took the leap to leave his day job and launch Dorset’s first gin distillery. A £10k government grant followed and one year later Conker’s Dorset Dry Gin launched to the public.

Passionate foragers, distillers and bottlers, the company handcrafts its spirits in small batches to ensure no shortcuts or compromises are taken when it comes to the craft processes, the ingredients and the final quality.

Conker embodies the spirit of Dorset, blending British wheat spirit and New Forest Spring Water with botanicals that can be found across the Dorset coast and New Forest.

The brand is already available in Tesco, M&S, Waitrose and Ocado with exclusive liqueurs also being created in partnership with Fortnum & Mason, including a limited-edition Fortnum & Mason Cold Brew Tea Liqueur.

The company is also involved in partnerships with the Craft Gin Club, That Boutique-y Gin Company, Speakeasy Ice Creams and the Royal National Lifeboat Institute.