Hog Back Brewery is expanding its craft beer range with the launch of East Coast IPA, available in keg and 330ml cans. The new beer will spearhead Hogs Back’s offer for reopening pubs this summer, which also includes its popular Hog IPA, now in cans, and Hogstar lager.

East Coast IPA is a balanced, naturally hazy and unfiltered 5.8% beer. While its intense mouthfeel and hop aroma give it an authentic US craft beer character, like all Hogs Back beers it also stands out from the herd.

Rupert Thompson, owner of Hogs Back Brewery in Tongham, Surrey, said, “The US style of IPA is hugely popular, making East Coast IPA a strong addition to our craft line-up, with a very different taste profile to our Hog IPA.

“As an unfiltered beer, East Coast IPA is packed with flavour and character, but is also an accessible beer that will be enjoyed by craft aficionados and mainstream beer lovers alike.”

He added, “As pubs look to win back customers post-lockdown, a distinctive and memorable range of keg beers from a local brewer will have strong appeal. We’re confident that drinkers in pub gardens across the south-east will be enjoying these great summer beers over the coming months.” 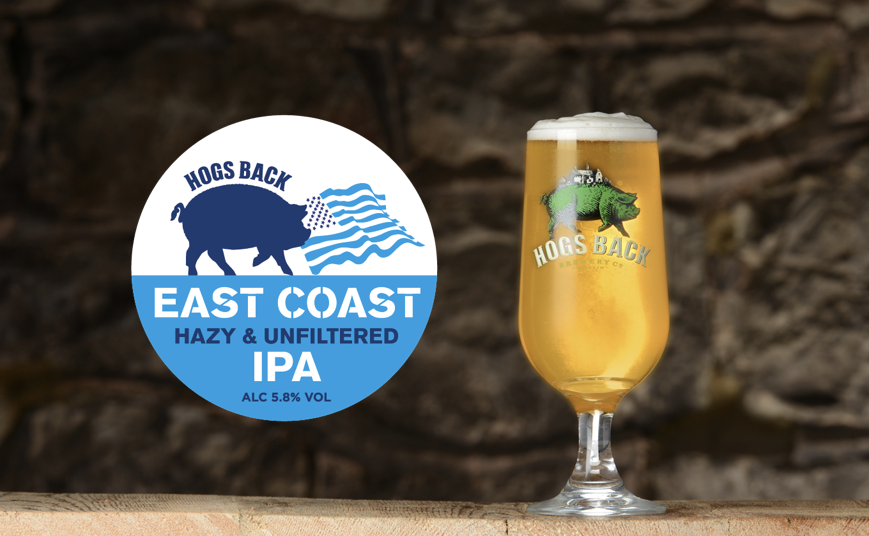 East Coast IPA, created by Hogs Back’s head brewer Miles Chesterman, is brewed with seven hop varieties. Along with Cascade grown in the Hogs Back hop garden, it uses Fuggles, Ekuanot, Calypso, Mosaic, Idaho 7 and Mount Hood. The four malts in the recipe are Pale, Munich, Wheat and Golden Oats.

The result is a perfectly balanced IPA with a smooth creamy backbone from the oats, complemented by tropical notes and the slightly piney finish that characterises a great IPA. Flavours of stone fruits, berries, lemons, and papaya are all in the mix.

Memorable branding on the East Coast IPA can and font badge features the familiar Hogs Back hog in a graphic which suggests the US flag as well as rolling coastal waves. The same clean, eye-catching design for Hog IPA and Hogstar creates a distinctive identity for the Hogs Back craft portfolio, and encourages consumers to drink across the range.

East Coast IPA is available in keg and cans. For further information: sales@hogsback.co.uk