Sally Abé, inspirational chef, talks her stellar career, plans for the future and why she prioritises British produce.

Our identity and relationship to British food has always been complex. When we talk about French food, we picture beef bourguignonne, cheeses and wines galore. Talk of Naples and Italy conjures up images of freshly baked pizzas and rich pastas. Even non-European foods have taken on clear identities – with Japanese sushi, Chinese dim sum and Thai rice. So what are we, this emerald isles? What is our food identity?

One incredible chef who is reshaping our conceptions of British cuisine is Sally Abé – current head chef of The Harwood Arms and advocate of British Lion Eggs. For her, British produce takes priority – both now and in the future.

Abé has had, and continues to have, a truly stand out career. She has worked with, and at, the biggest names in the British food industry. Including notorious chef, Gordon Ramsay, whom she worked with at The Savoy and Claridge’s. Additionally, Abé has trained under Brett Graham, the two-Michelin-starred chef, wherein she developed a range of excellent culinary skills that carried her forward throughout her career. 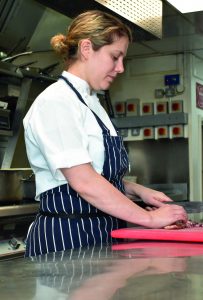 Unlike most chefs, perhaps, Abé wasn’t born into cooking. She explains: “Strangely enough, I wasn’t really into food as a kid but when I moved to Sheffield when I was 18, I really got into cooking and decided to study hospitality and business management at university. I did a placement at The Savoy in London as part of that, and once I got there, I realised I wanted to be a chef. I’ve always been in the industry one way or the other!”

“ and use as much British produce as is possible,” she explains. “And I’m led by the seasons of the British Isles. The Harwood Arms has always been known for championing the very best British produce with a focus on game and wild food, all of which is sourced within the UK. Provenance has been key to our success, and sustainability is also very important to us.”

For Abé, the use of British produce also means she knows exactly where it’s coming from. Elaborating on this, she champions her love for British Lion eggs. The Lion Code of Practice is managed by the British Egg Industry Council and this scheme assures that British Lion eggs meet stringent standards. With more than 700 auditable criteria, the high standards protect against Salmonella and other potential food safety issues.

The red lion stamp is a sign of quality and signals that the hen and egg is guaranteed British. Moreover, the unique ‘passport’ system ensures complete traceability of hens, eggs and feed so every step of the supply chain is monitored. To ensure the freshness and quality of the eggs, the Lion mark, system of production and best-before date is printed on the shell and the egg box – meaning that Abé and other consumers can trust the eggs they use.

“I only ever source free-range eggs that have been stamped with the British Lion,” Abé adds. “Most importantly, it is to make sure that they’re safe for our guests to eat, but it’s also a hallmark of quality which is a cornerstone of the dishes we produce at The Harwood Arms.”

British Lion has revolutionised the British approach to eggs in general too; before the introduction of the British Lion 21 years ago this year, the safety standards of eggs were less certain. Now, with popular dishes such as Eggs Benedict and poached eggs on avocado and toast… it’s become a hero ingredient. With Brexit on the horizon, and the potential for a higher proportion of lower quality imported eggs coming into the country, being able to rely on the Lion is more important than ever.

It’s not just the eggs that she ensures live up to the highest of quality and food safety, Abé continues: “Aside from the legal obligations we have as a restaurant serving food to the public (and natural common sense!), I make sure we evaluate and choose our suppliers very carefully. They must have the right documentation, and naturally, their produce has to be as fresh as possible. I need to know where all of our ingredients come from.” 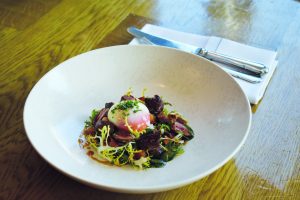 For Abé, British cuisine and produce will remain a huge part of her future. We ask her how she envisions the next ten years of her career?

“I’m so busy at the moment, I can’t even think about what I’m going to be doing next month! In ten years’ time… Who knows? All I know is that I will keep cooking and keep using amazing British produce. I don’t ever see myself leaving the industry, so I know I’ll always be involved in it, in one guise or another.

Slow cooked egg with a salad of duck hearts, bacon and hazelnuts:

Method:
Duck Hearts
Brine 10% for 2 hours.
Vac Pack with oil, thyme and a cracked clove of garlic.
Cook 65 degrees for 60 minutes.
Drain and reserve in the fridge.
To serve pan fry lightly until browned on both sides and slice into three, 2 hearts per portion.

Duck Gizzards
Salt 16g per kilo for 2 hours.
Vac Pack with oil and cook at 85 degrees for 8 hours.
Leave to cool.
Dice into 0.5cm cubes for service.

Egg
Cook in the shell at 63 degrees for one hour at 11am and 5pm.
Store in small water bath at 55 degrees for service.

Place all ingredients in the blender and drizzle in the oil to emulsify.
Store in squeezy bottle for service. To serve mix with 50% chicken sauce in a small pan and warm gently.

To serve:
Mix frisee, mache, bacon, hazelnuts, livers, croutons, chives, shallots in a bowl and dress with hazelnut and chicken sauce dressing, season with salt to taste. Dress into a ring into a large bowl.

Saute the duck hearts and livers and slice, arrange over the salad and remove the ring.

Crack an egg onto a tray, season with salt and pepper and carefully spoon onto the centre of the salad, making sure it is secure and won’t roll off.