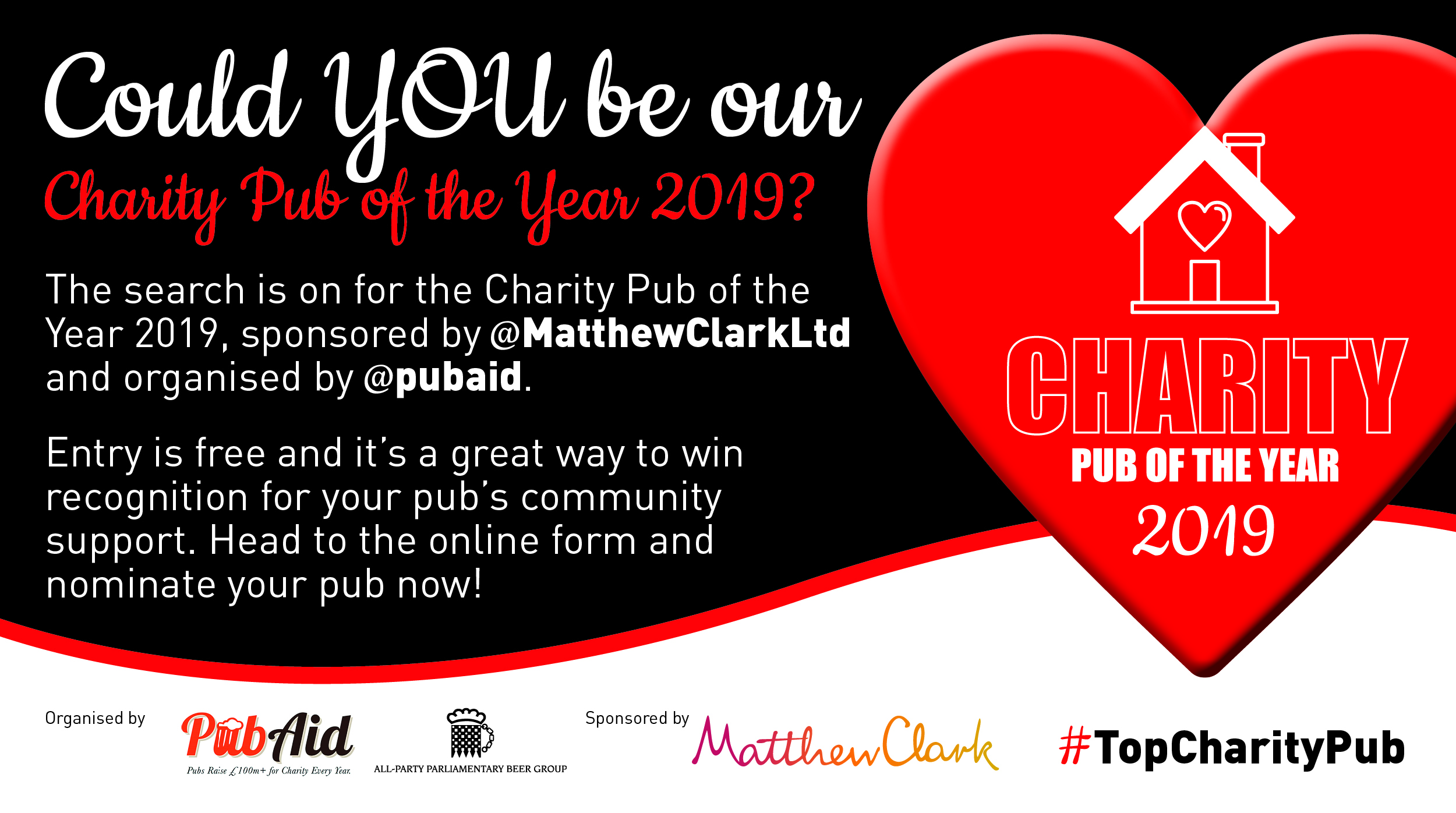 Pubs across the country from Elgin to Southampton have entered the Charity Pub of the Year Awards, organised by PubAid and the All-Party Parliamentary Beer Group (APPBG) and sponsored by Matthew Clark.

Entrants are coming from all sectors of the industry, with managed and leased pubs from operators including Ei, Punch, Wadworth, Fuller Smith & Turner, JW Lees, Hawthorn Leisure, St Austell and Joseph Holt as well as independent licensees. The competition is open until 30th September and entry is via an online form at http://www.pubaid.com/matthew-clark-charity-pub-award

The competition, now in its second year, seeks to recognise pubs who go the extra mile in their support of charities and good causes. While the sums of money raised are one element, judges are also looking for other involvement, such as hosting meetings for local groups, offering meals as raffle prizes or doing good works in the community, such as litter picking or helping elderly residents.

All pubs who enter the competition are promoted on PubAid’s social media channels and pub companies are encouraging their licensees to take part, with the help of a suite of assets including internal ads and Twitter and Facebook templates. To request these, or to find out more about the competition, contact pr@pubaid.com.

After the closing date, judges will review entries and publish a shortlist of the pubs who are, in their view, best fulfilling the aims of the competition. All finalists will be invited, with their MP, to attend a reception in London, where the overall winner will be announced.

Co-founder of PubAid, Des O’Flanagan said: “We’re delighted with the response so far to the Charity Pub of the Year 2019 and grateful to Matthew Clark for their sponsorship which is enabling us to give the competition more support this year.

“Whatever size of pub you run, whether you raise money for a national charity or a local cause, or support your local community in other ways, please think about entering and receiving recognition for the great work done by you, your team and your customers.”

David Philips, Managing Director, Matthew Clark, said: “The support provided by pubs up and down the land for charities and worthy causes is hugely impressive, with licensees and their teams frequently putting in many additional hours to organise fundraising events and similar, on top of the demands of running a pub. They certainly deserve recognition and we are proud to be sponsoring these awards for a second year.”

Mike Wood, MP for Dudley South and Chairman of the All-Party Parliamentary Beer Group, said “We had some fantastic entries for this award last year.  It was truly humbling to learn about the amazing things that pubs do to support charities and local community groups.  We already have an impressive list of entrants for this year’s competition and are looking forward to welcoming the finalists to a celebration of their achievements in the autumn.”