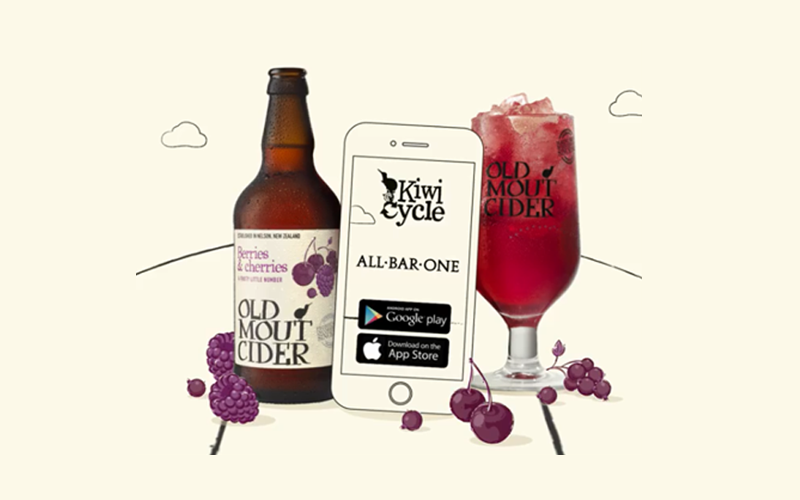 New Zealand-born cider Old Mout partnered with Mitchells & Butlers to leverage their existing platforms and launch a ‘do-good, sustainable’ mobile game, aiming to raise money to help save the kiwi. In the three months since launch, the app has raised £20,000 for charity Kiwis for kiwi and also received over 40,000 visits to the app store and 500,000 plays.

Launched in May to help raise awareness of the endangered kiwi bird, encourage trial and drive engagement of Old Mout cider, the game has proved hugely successful – not only for the brand, but for the customer and kiwi bird too. In the spirit of popular non-stop running games, Kiwi-Cycle encourages players to collect fruit in order to unlock in-outlet prizes (such as free Old Mout ciders, starters and desserts) redeemable across a total of 673 participating outlets including All Bar One, Nicholson’s and Sizzling. The game also encourages players to recycle bottles across the course which generates donations to the charity Kiwis for kiwi.

The campaign arrives as Old Mout celebrates two years of national listings across the M&B estate, representing as the cider brands largest on trade customer in the UK. The brand needed an activity that would create top of mind awareness, encourage trial and drive engagement. With sustainability at the heart of the brand’s ethos, paired with Old Mout’s fun and quirky personality, Kiwi Cycle was born!

Mitchells & Butlers procurement manager Ben Lockwood explains the reasoning behind the launch of Kiwi-Cycle; “HEINEKEN UK continue to display forward-thinking and innovative digital activations, so using this expertise to help with the launch of Old Mout was an obvious step for M&B. Gamification continues to capture the imagination of our guests so this was an interactive way to make them more familiar with the Old Mout brand. The Kiwi Cycle game enjoyed close to half a million plays, leading to extremely positive redemption numbers on the prizes available. This has increased trial of all our listed Old Mout flavours, including Berries and Cherries Alcohol-Free and ultimately ensured sales have been significant this Summer. Feedback from our operators and our guests has been extremely positive and we expect that to continue with further brand activations planned, whilst being able to follow up other sustainability projects, such as removing straws from All Bar One, saving the Kiwi has definitely been something that has resonated with our guests”.

Old Mout’s Emma Sherwood-Smith adds; “Mobile gaming is massively popular and provides a major opportunity for HEINEKEN to engage consumers, activate brands and help meet our customers’ objectives. We’re delighted with the results of Kiwi-Cycle to date and plan to incorporate these learnings into plans for our other major customers, while also taking this approach into other channels of the business. Following the success of our investment in the campaign we’re enjoying ‘the fruits of our labour’ with M&B as we move into our second year of the Old Mout national listing.”

Kiwi-Cycle delivered 500,000 plays, almost double that of other top performing game Sol Catcher (also hosted on M&B app platforms back in July), and drove 40,000 unique customers to the Google and Apple app stores – a key aim for Mitchells & Butlers. The exotic-fruit cider company also amplified the game with paid media on Facebook, further encouraging consumers to download M&B apps across the board. The activity also delivered a great reaction across social media with over 14m impressions, 3,000 reactions and 296 shares since its launch in May.

Win prizes and help save the kiwi, play Kiwi-Cycle today: http://heineken.kiwi-cycle.client-testing.co.uk/ (mobile only).

Old Mout Cider is also urging on-trade customers to sign up to a sustainability partnership (www.oldmoutcider.co.uk/partners) and to recycle where they can. For every sign-up, Old Mout will donate £50 to Kiwis for kiwi and will hero each customer’s sustainability work in the media