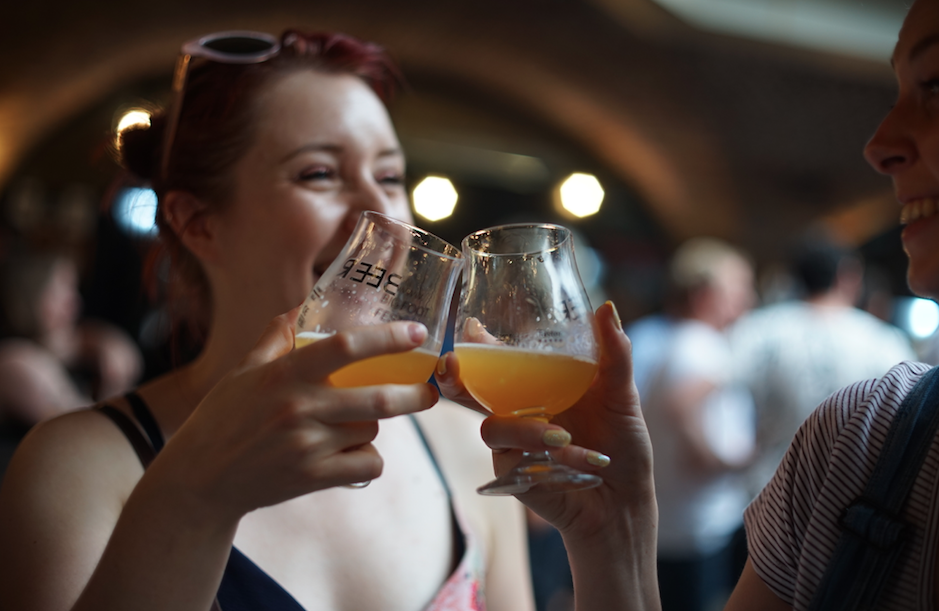 Already before the gates to London’s Tobacco Dock, the queues were already forming. In the lead up to the 11.30am kick off on day one of the show; when the visitors would be a rich mix of industry and the public, the excitement was pulpable.

It was another one of the capital’s infamous heatwaves in the lead up to the show and one could sense visitors were keen to have their thirst quench with some of the best and newest craft beer brands the nation (and indeed, further afield) had to offer.

This was the London Craft Beer Festival (LCBF), when more than 70 of the best breweries hand-picked from across the globe unite under one roof to create an outstanding collection of craft beer. With more than 10,000 consumers attending the event of the weekend; which took place from August 3rd-5th, LCBF’s sixth year was a great success.

With so many industry experts flocking to LCBF, it’s only natural that the event organiser would put on a stellar line up of speakers to share their expertise. In a series of Raise The Bar sessions, industry experts were welcomed to talk about topics passionate to them.

One of the stand out talks of the series was from Jenn Merrick, founder of Earth Station and the keynote speaker in fact, who lead a discussion on quality. This was followed by Bruce Gray, owner of Left Handed Giant and Small Bar, who focus his attention on the philosophy of the local.

Prior to the event, the co-founder of LCBF, Daniel Sylvester, said: “The Raise The Bar sessions provides a forum for everyone connected to the industry to come together, hear from the best in the business and learn new things in this fast evolving space.

“Also, having spoken to both suppliers and brewers, we found there was an emerging disconnect between them. So by providing an area for them to meet informally, a place in keeping with the relaxed atmosphere at the festival, we hope to help the craft beer category to continue to grow and prosper.”

One of the stand out elements of LCBF, was the ability for visitors to actually try the product. Upon arrival, each visitor was given a glass and encouraged to get talking to the brewers and trying the beer.

This opened up the lines of communication between the exhibitors and visitors massively, as they were able to explain how they made the product to create flavour and answer any direct questions about the product at their stand.

Similarly, some stands created heavily immersive experiences for the festivalgoers in the venue’s Vaults space. These include Wild Beer Co, Fuller’s & Friends, Thombridge, Harbour Brewing Co and BrewDog – to name a few.

It wasn’t just beer on the menu either; with LCBF offering the opportunity to try a variety of gin, whiskey, wine, cider, food and music too.

Sylvester adds: “Craft beer is one of the fastest growing sectors of the drinks industry and our festival offers the trade the opportunity to taste, network and share ideas and practical advice. Brewery owners and head brewers will be there in person, guaranteeing that buyers can meet the decision makers on the day.”

One thing to note is the younger demographic that are getting in to craft beer; whether they are attempting to brew it themselves, or just enjoying the drink, young people are pioneering the beverage.

This could be because the beer industry is more inclusive of young people. A report by SIBA found that nearly half of the people working in the sector are aged 24-45, with 37 per cent aged below 34. Moreover, there is a huge investment in young people – more than one in ten employees are aged 16-24; getting into industry so young fuels their love of the product.

Brewers have been noticing this trend too. Jimmy Hatherley, founder and head brewer at Unity Brewing Co, said: “Interestingly, when CAMRA first started, all those guys were really young, late teens, early 20s. It’s only as they’ve got older and the beer and marketing failed to move with the times is where this attitude of beer being an old guys drink has come from. The influence of modern, exciting, colourful and most importantly flavourful craft beer from the states reignited an interest in beer for young people looking for exciting flavours and drinking experiences.

“With the Instagram generation, it’s been impossible for this to slow down too. Breweries know they have to (and really want to) keep evolving, moving forward and staying relevant so they are appealing to a much more diverse audience. From the popularity of modern beer, breweries are becoming more and more like bands as well and this is really appealing to a younger audience. People follow breweries now, look out for their new releases, idolise their brewers and go to all their events. It all comes down to the fact that the flavours and marketing of modern breweries has become really exciting and it all feeds from that.”

With all this in mind, and brewers pushing the boundaries of their creations – offering a more vibrant and exciting outlook for a younger demographic, Freshers’ Week offers the perfect event for craft beer to flourish. With September only around the corner, brewers can consider how they market their products to a younger demographic, already excited to further their craft beer, and university, journey.