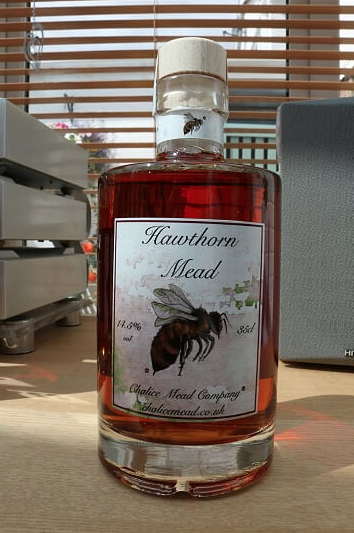 Make Mead Modern! Mike Wagstaff, the owner of Chalice Mead, is re-inventing mead in a way that he hopes will increase its demand to make a delicious comeback. His Meadery is based in Hampshire near Petersfield, located in the beautifully picturesque countryside.

Mead is known as the oldest alcoholic beverage referred to by the ancient Greeks as “nectar of the gods”. The drink has influenced cultures and religions but, as the popularity of beer increased through the centuries, the interest in mead declined.

Chalice Mead was founded on a dream, a desire to reconnect with nature by bringing mead fully into the modern age. Mike aims to raise awareness and use the balance of traditional and modern techniques to create a product that is enriched with beautiful flavours that people will love and admire whilst at the same time supporting bee population in the UK and beyond.

And so, the story begins…

Mike hosted a summer solstice party. A member of the party introduced him to a bottle of mead. He states, “I couldn’t believe how fantastic it was, I usually find mead rather too sweet, but this mead was just right”. Mike then felt inspired to create his own mead, eventually, with practice, his expertise allowed him to develop a variety of flavoursome drinks to sell.

After creating the mead, he understood that branding was also vital to the success of his business. With help from his family, he focused on selecting the right bottle, the correct coloured labelling whilst also designing an artistic logo to create the perfect brand image. After making it ethically suitable, he then felt ready to introduce his drink to beverage specialists. He continues:

“I called a local independent wine shop and went to see them. It was a nerve-racking experience. I lacked confidence in my product at this point; questioning whether it was good enough for them. I am very thankful to say that after the tasting there were empty spittoons and smiling faces!” They loved the Mead purchased 48 bottles. This was enough to give him the confidence that his product was up to standard. Five days later they placed the second order for twice as much.

He continues: “I set myself a task to phone farm shops and independent companies who he hoped would stock his product!” Two and a half years later he now has 86 stockists in the UK! His business is currently booming.

All in all, it has more than 10 varieties. The different flavours it produces, complement different months of the season. As Chalice Mead are heading into our Autumn months the Hedgerow varieties such as Hawthorn, Blackberry, Elderflower, Nettle become more popular; it has recently added Rhubarb to its range.

You can also create wonderful cocktails with his mead. For instance, you can combine elderflower mead with prosecco, ice and elderflower sprig to create a mead cocktail. You can also cook with mead. ‘Drunken Pig’ is a recipe that Chalice Mead has created. They advise that you marinate mead with pork to create a delicious sweet sensation.

Although you can buy individual bottles of mead, you can also purchase your very own hamper filled with three bottles of your choice. Perfect for gifts, or even if you are indecisive as to what mead you want to purchase! To discover more about his flavours, visit his website on www.chalicemead.co.uk.

You will be pleased to know, Chalice Mead now have over 80 stockists throughout the UK, with more being added almost every week.