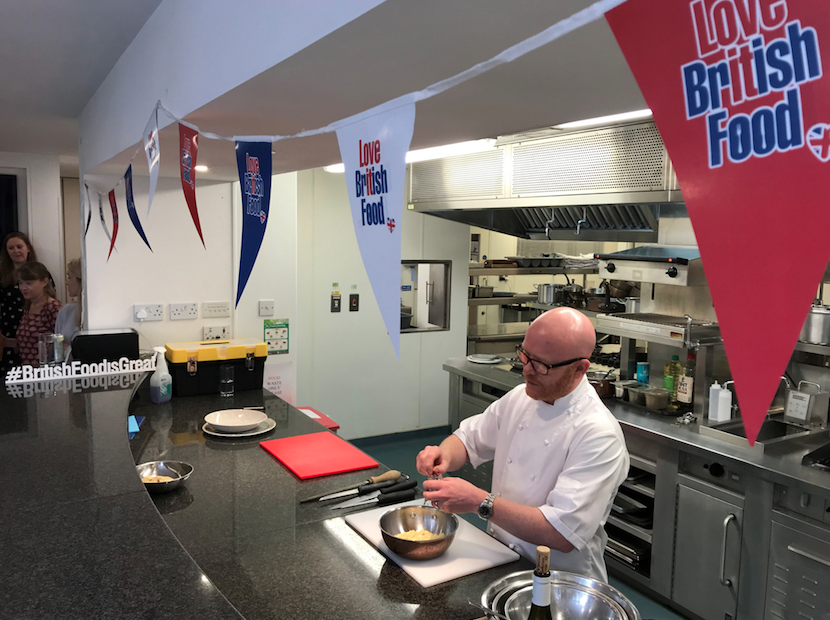 A breakfast of bacon baps made with Red Tractor British rindless back bacon was followed by a short introduction from Oli Blanc, an ambassador for Love British Food, the organisation behind British Food Fortnight. Love British Food has proved to be an important influencer in the retail, catering, education and volunteer sectors, playing a pivotal role in establishing a more robust market for Britain’s food.

Guests, including customers and the media, were then treated to a range of British classics freshly prepared by former Masterchef: The Professionals champion, and Brakes Scotland ambassador, Gary Maclean, using a selection of British ingredients available from Brakes.

So why is British provenance so important to today’s consumers? “Increasingly, we don’t know where our products are coming from,” says Brakes Brand Manager, Laura Stockley. “This is creating a culture of distrust and as a consequence we’re seeing consumers opting for locally sourced produce more than ever before.

“According to data from Love British Food 56% of Brits are looking for locally sourced ingredients on a menu and 74% claim they would like more foods made in their local region or close by. And, although Brits are dining out less frequently, we know that when they do they’re willing to spend more. This, coupled with the fact that they’re looking for provenance, represents a good opportunity for premiumisation. Furthermore, the most important categories to focus on in order to add this provenance, regardless of the sector or customer, are dairy, meat and fish,” concludes Stockley.

So, what about the chef’s perspective?

“As a chef and lecturer I know first-hand how important locally sourced food, with strong provenance, is to chefs and consumers,” says Gary. “The team at Brakes Scotland and Brakes have so much passion and enthusiasm for Scottish and British produce. It’s fantastic to see the work the company is doing to support Scottish suppliers, including collaborating with smaller suppliers, and I’m genuinely proud to have worked with the company for almost two years and to see the local lines flourish. I have always been a huge advocate of Scottish produce across the seasons, from shellfish to fresh berries, and I believe Scotland is the envy of Europe in terms of the quality of produce we have on our doorstep.”