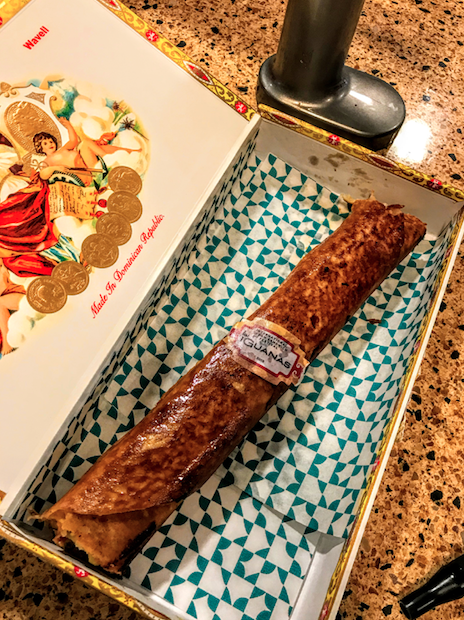 Squaring off against 40 chefs and hardcore sandwich aficionados from across the globe held no fear for Las Iguanas’ head of food development Glenn Evans as he travelled to Florida to vie for the seventh annual title of The World’s Best Cuban Sandwich.

The multi-award-winning chef knew he had a world beater on his hands – an innovative take on an established Las Iguanas menu favourite, made using French’s Classic Yellow Mustard and New York Deli Pickle Relish – which saw him return triumphant, winning first place for Best Non-Traditional and second overall in the World’s Best category.

He said: “Even though the event is in its seventh year, it’s growing all the time – there’s a real Cuban culture in Florida and these guys have created this festival and invited loads of people from around the world to bring their takes on the world famous ‘Cubano’.  We were like; ‘that sounds like an adventure – let’s do it.’”

The traditional Cubano is a Latin variation on a grilled ham-and-cheese sandwich, made with ham, roasted pork, Swiss cheese, pickles, mustard, and Cuban bread. The highly popular version on Las Iguanas’ menus is a more traditional homage, created using French’s finest – “You need to be able to taste the layers of flavour – the French’s mustard marries so well with the pulled pork, caramelised pork belly, ham and Emmental – while the Pickle Relish is less polarizing than gherkins and adds just the right sweetness.”

Glenn’s award-winning creation at the festival was something a bit different, however.

“We created what we called a ‘smoking Cuban cigar’, so basically all the same ingredients wrapped up in a tortilla, nice and tight, browned off with butter on a Plancha until it was evenly brown to look like a cigar, and placed in a cigar box with an edible cigar label. To add theatre to the serve, we pumped it full of smoke and the judges absolutely loved it.

Glenn has confirmed that the sandwich will be making its UK-wide debut on Las Iguanas Spring/Summer menus in 2019, with French’s Classic Yellow Mustard and New York Pickle Relish at its heart. “We’re working with a company who make unique wooden products for our brand – so they’re going to make the cigar box with a little hole in the side to pump in the smoke. It’s really exciting.”

Will he be travelling to Florida in 2019 to compete again and see if he can go one better?

“Absolutely, we’ll approach it with the same ethos – using the same ingredients – but enhance it, maybe make it a bit more traditional, and look to go and win the competition outright!”

McCormick Flavour Solutions is giving sites across the UK the opportunity to sample full size bottles of French’s Yellow Mustard to use front of house and in recipes helping them bask in the brand power of one of America’s biggest and most flavoursome exports.