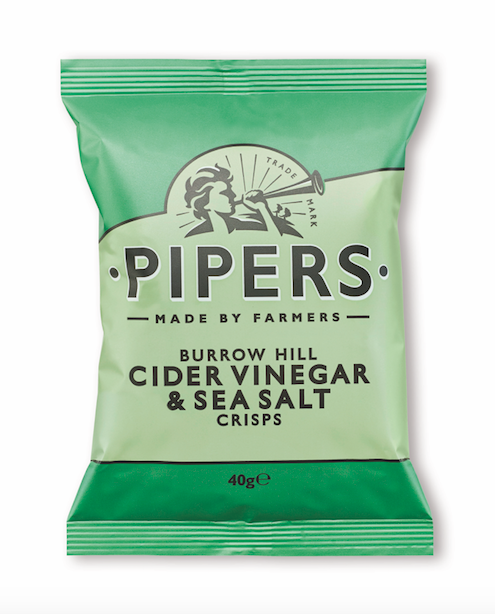 This year, one of Pipers’ most popular flavours, Burrow Hill Cider Vinegar & Sea Salt, won two Gold Stars, awarded to; ‘outstanding products, above and beyond delicious’. Less than
15% of entries achieve this rating. There were single Gold Stars for; Lye Cross Cheddar & Onion; Kirkby Malham Chorizo; Karnataka Black Pepper & Sea Salt; and Biggleswade Sweet Chilli. This award is for products described as; ‘simply delicious – a food that delivers fantastic flavour’.

Katy Hamblin, Marketing Manager at Pipers, comments: “The 2018 Great Taste awards represent another great year of achievement for Pipers Crisps. We work really hard to make sure our flavours are full-bodied, distinctive and balanced, so we were particularly pleased that the judges’ comments reflected this. For the two Gold Star winning Burrow Hill Cider Vinegar & Sea Salt flavour they said ‘it’s great to find a crisp where the salt does not overpower the vinegar.’ They thought our Kirkby Malham Chorizo ‘delivered the promised flavour together with a good hit of chilli’ and our Lye Cross Cheddar & Onion has a ‘well-balanced cheese flavour and a slight sweetness from the onion’. Overall, the judges thought our crisps were ‘attractively presented, light, crisp and not oily’,” Katy adds.

Great Taste, organised by the Guild of Fine Food, is the largest and most trusted accreditation scheme for fine food and drink. It has been described as the ‘Oscars’ of the food world and the ‘epicurean equivalent of the Booker prize’. It supports and promotes food producers large and small, who want to supply the UK independent retail sector and overseas stores selling fine food.