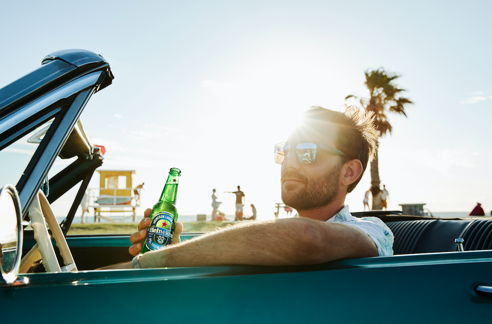 London, 17th July 2018: Heineken® 0.0 has launched the biggest ever campaign for an alcohol-free beer in the UK. The integrated ‘Now You Can’ campaign includes a £6 million-pound investment in TV commercials, cinema, digital and social activations, as well as on trade promotions, leading the alcohol-free category.

The campaign premise is based around the inclusiveness of Heineken® 0.0 to all moments and social occasions, which might call for a great tasting beer but not for the alcohol. The first in a series of three adverts, titled ‘Now You Can: Parking’, sees a man enjoying a Heineken® 0.0 in a traditionally non-beer scenario. The advert was launched during the World Cup semi-final between England and Croatia, which drew a record TV audience of 26.5 million people[1] plus the millions more watching in pubs and big screens around the UK and will run on TV until September 2018. Now You Can: Gym Locker and Now You Can: Work Presentation are the other two adverts in the series.

Heineken® 0.0 was first launched in March 2017 and has quickly become the fastest growing brand in the alcohol-free segment, growing 187% in the last year[2]. With the growing trend of healthy living, consumers are looking for natural products like beer but with low or no alcohol. Heineken® 0.0 has been leading the charge thanks to its great taste, natural ingredients and the fact that it only has 69 calories. Over half of the top 10 bottled beers in the UK gaining the most distribution in the last year have also been alcohol free[3].

Nic Casby, Heineken® UK Brand Director, said: “As pioneering brewers, we are committed to promoting our innovative products and campaigns to meet consumer needs. We’ve seen phenomenal growth in the Low & No Alcohol category and the ‘Now You Can’ campaign allows us to communicate all the different drinking occasions where Heineken® 0.0 can be enjoyed. We have a bold ambition and a great commitment to lead the premium non-alcoholic beer segment and build positive associations around drinking choices – in other words, we want to make alcohol free beer cool.”