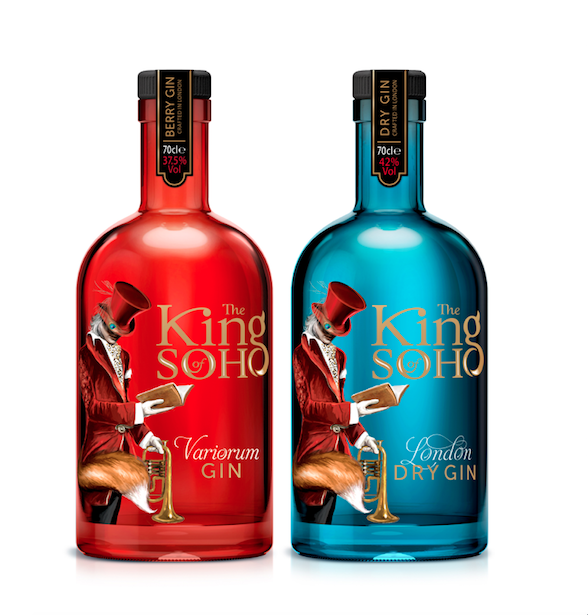 The King of Soho Variorum Gin adds a hint of pink and notes of strawberry to complement the essential juniper and citrus flavours of the classic recipe, making it ideal to be enjoyed over ice, in cocktails and mixed drinks; served with a strawberry garnish. The creativity and literary works of Soho are the inspiration behind the name – in literature, a variorum edition is an original work with notes.

Like the original, Variorum is distributed in the UK & Ireland on-trade and off-trade by Hi-Spirits. The King of Soho brand is the creation of West End Drinks, owned by entrepreneurs Alex Robson and Howard Raymond, and styled after Howard’s father, the legendary Soho theatre impresario and businessman Paul Raymond.

Alex Robson, managing director of West End Drinks, said: “The King of Soho Variorum Gin is a celebration of the colour and style of Soho; a pink berry spirit inspired by the creativity and literature of London’s iconic district, to join our smooth and premium drinks line-up.

“We launched the original King of Soho classic London Dry almost five years ago, and the King of Soho Variorum Gin builds on that success with an appeal to a gin consumer who is looking for a slightly lower ABV and berry notes in their drinks and cocktails. Crafted in London , it reflects the modernity and innovation of our brand and the ever-changing spirit that is Soho.”

The signature serve for The King of Soho Variorum is the Variorum Cooler:

Build in a tall glass filled with cubed ice, and garnish with a grapefruit twist and a strawberry.

The King of Soho Variorum launches in late July, with a RSP of £33.50.