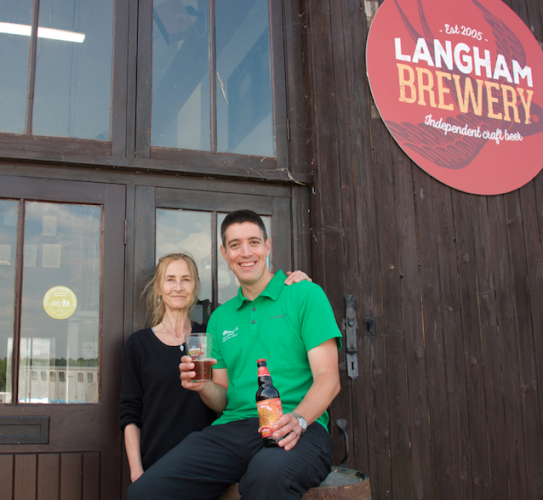 Langham Brewery has released the first bottles of its classic South Downs Best Bitter to support work in the South Downs National Park, including a campaign to raise funds for critical repairs on the South Downs Way national trail.

The independent craft microbrewery, which produces cask conditioned real ales and keg beers including Halfway to Heaven, Hip Hop and Arapaho, is based within the National Park on the Cowdray Estate, near Petworth, West Sussex. Langham became the first corporate partner of the South Downs National Park Trust, which launched last year.

Lesley Foulkes, the brewery’s co-founder said: “We’re thrilled with our South Downs Best Bitter which features a striking image inspired by the beautiful South Downs on its label. We are aiming to raise a significant amount over the next couple of years towards projects in the National Park, including vital restoration of sections of the South Downs Way.”

She added: “We have welcomed the opportunity to collaborate with the trust to raise awareness of the fabulous countryside that surrounds us, and to lead the way in raising funds to conserve the much-loved South Downs Way for future generations.”

The steam heated brewery is also creating a South Downs National Park Information Point at the brewery and has signed up to the National Park Authority’s new Cyclists and Walkers Initiative.

Foulkes said: “The information point will be a place where weary cyclists, walkers and people just passing by can drop in and enjoy refreshments in convivial surroundings and discover the delights and possibilities of the National Park, the South Downs Way and surrounding countryside.”

Andy Gattiker, who manages the South Downs Way, said: “Langham Brewery are award-winning local producers, based right in the heart of the National Park – it would be hard to find a more a natural partner to the new charity. The new beer looks and tastes great and we are really grateful for their support of the ‘Mend Our Way’ appeal and other future work.

“Fifteen thousand pairs of boots, 10,000 bicycle tyres and 800 hooves travel the length of the trail each year, and millions more will enjoy a section of it, causing a lot of wear and tear! Langham Brewery’s donations will help us with significant projects on more remote sections of the path which, are too expensive to tackle using existing funds.”

Now the brewery is extending beyond cask and bottled ales with the launch of six new craft keg beers including three unfiltered from its cask range, which provides real ale with all the advantages of keg, and three new brews.

Beer alchemist and co-founder James Berrow said: “Our passion is to produce innovative, distinctive and flavoursome real ales using the finest quality ingredients and traditional craft skills. As we are completely independent we are not constrained in our recipes. The beer always comes first.”

He adds: “We pride ourselves on our modern brews with a traditional twist and our new craft keg beers are no exception. We have invested in a state of the art kegging plant and taken our time to ensure we are completely satisfied with our new beers. You can’t hurry a good brew!”.

Langham Brewery was one of the first four breweries in England to gain a Cask Marque and SALSA plus Beer accreditation for its quality brewing processes and performance and still secondary cask conditions its ale.