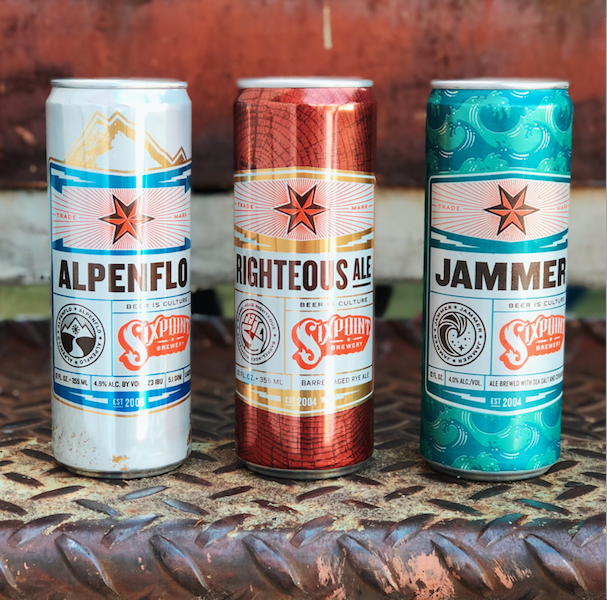 Sixpoint Brewery is building on the successful UK launch of its core range with the introduction  of two new, super high-quality, speciality styles and one new all-year-round. The brewery, from Brooklyn, New York will be increasing its UK penetration in time for the American Independence Day on 4th July, via UK importer, Heathwick.

The innovative new beers represent the start of a new programme by Heathwick to release speciality, limited-edition formulations from Sixpoint every two to three months. The exciting new additions will be available alongside Sixpoint’s core range of The Crisp, Sweet Action, Bengali and Resin, and comprise:

Alpenflo –  4.9% ABV Helles lager using all malt, 100% 2 row-barley and a clean, noble hop character from Tettnanger hops sourced from family farms in Bavaria. Bright, clean, beautiful. Available in 355ml cans and 30litre kegs, will be available all year round.

Righteous Ale – 10.5% ABV  Barrel-Aged Rye Ale made with three types of rye malts and smoothed out in both Bourbon and Rye whisky barrels for a layered and complex beer with flavours ranging from spicy rye character to maple to vanilla.Available in 355ml cans until September.

Jammer – 4% ABV Gose, a refreshing, tart brew balanced with a fruity coriander aroma and a touch of sea salt. Just tangy enough to tickle the taste buds.  Available in 355ml cans until September.

Graham Richardson, general manager at Heathwick, comments:  “Sixpoint is one of the top selling beers in the New York metro area and we’re seeing many of the city’s facets being replicated in the UK market. Following a successful launch earlier this year the time is now ripe for Sixpoint to build on its U.S. provenance here in the UK and offer consumers what they’re looking for: a premium quality, authentic, American craft beer range that’s new, innovative and different. With the launch of the new speciality styles, Sixpoint will be available in six high quality beer styles in total giving the consumer a much greater opportunity to enjoy their range of products. Sixpoint’s latest launch in the UK is the first in a series of new limited release beers that we will be introducing every two to three months, as well as continuing with the core range throughout the year.”

Max Nevins, Vice President of Marketing at Sixpoint, adds: “”We’ve been sending over some of our favorite beers to the UK for years, but it’s awesome to be able to ship our limited beers over and show off the full, dynamic range. Righteous, Alpenflo, and Jammer are a direct result of our new product development team’s efforts since Brewmaster and Chief Product Officer Eric Bachli came on board in September. Jammer is light and tangy, Righteous is super rich and complex, and then Alpenflo is a certified classic German Helles that’s been getting rave reviews. We’re amped!”

The new speciality beers will be supported with promotions around American Independence Day, such as tap takeovers and festivals.

Sixpoint was born out of an 800-square foot garage in Brooklyn, New York City, in 2004 by award-winning home brewer-turned-professional Shane Welch, who had amassed over 1,000 individual homebrew recipes. The brewery’s name is derived from the ancient six-pointed brewers’ star, which had symbolically adorned the walls and equipment of ancient breweries since at least the Medieval period. Sixpoint’s motto is “Beer is Culture”, to highlight the human trajectory—the earliest human civilisations were founded upon the cultivation of cereal grains for making beer.  Sixpoint aims to perpetually inspire the art, creativity and collaboration generated through beer by acknowledging the history of the craft, while forging ahead to inspire culture in a modern setting.