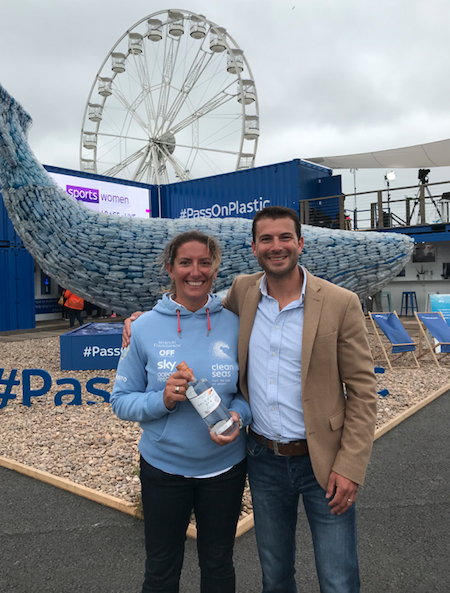 Environmentally conscious Salcombe Distilling Co. is delighted to be involved in two plastic related initiatives this month.  In addition to the Devon based company’s ongoing efforts to minimise the use of plastic, Salcombe Distilling Co. recently supported A Plastic Planet’s ‘Plastic Free Party’ in Cardiff and is sponsoring the forthcoming Plastic Clever Salcombe’s ‘Paddle & Pick Challenge’.

Salcombe Distilling Co. is internationally recognised for its award-winning Salcombe Gin, the luxury spirit which embodies an adventurous lifestyle on and around the water.  Inspired by the coastal vitality of Salcombe and its ship building heritage for exotic trading routes, the protection of the oceans is of key importance to this rapidly growing business.

Co-founder Howard Davies says: “The Volvo Ocean Race is the epitome of adventure and has always been something I personally have followed closely.  It means a great deal to us here at Salcombe Distilling Co. to have had a level of involvement in this sailing phenomenon.”  Howard continues: “We are continually looking at ways to reduce our use of plastic.  We have already stopped using plastic straws in our bar in Salcombe, switched to wooden stirrers and have been developing a new sustainable protective packaging solution to replace the industry standard plastic currently in use when sending our bottles by courier.  It’s a great pleasure to team up with others who are campaigning to make a difference, including A Plastic Planet and Plastic Clever Salcombe.”

Since 1973, the Volvo Ocean Race has provided the ultimate test of a team and a human adventure like no other.  Over four decades it has kept an almost mythical hold over some of the greatest ever sailors – and the 2017-18 edition will take the teams 45,000 nautical miles around the world, across four oceans, touching six continents and 12 landmark host cities.  It is often described as the longest and toughest professional sporting event in the world, sailing’s toughest team challenge and one of the sport’s Big Three events, alongside the Olympics and the America’s Cup.

The Volvo Ocean Race started in Alicante on October 22nd 2017 and has stopped in Lisbon, Cape Town, Melbourne, Hong Kong, Guangzhou, Auckland, Itajai and Newport before its recent arrival in Cardiff.  The grand finish will be at The Hague at the end of June 2018.

One of the yachts participating in this year’s Volvo Ocean Race is Turn the Tide on Plastic.  Britain’s Dee Caffari is leading a mixed, youthful team bringing a strong message of sustainability and raising awareness around the growing issue of ocean pollution.  Globally, in excess of 300 million tons of plastic is produced every year, half of which is for single use.  More than 8 million tons of plastic are dumped in our oceans every year.  Over the last ten years more plastic has been produced than during the whole of the last century*.

Plastic Clever Salcombe is a campaign run by journalist and environmentalist Anna Turns and her six-year-old daughter Ella.  Anna and Ella are on a mission to help Salcombe become more plastic clever.  On the 8th and 9th June, Anna will be doing a 22 mile ‘Paddle & Pick Challenge’, paddling and litter picking along the entire stretch of the Salcombe-Kingsbridge estuary, including all the creeks, with Ella joining her in parts.  This campaign is a part of Kids Against Plastic, a national child-led initiative founded two years ago by sisters Amy and Ella Meek (14 and 12 years old).

Commenting on the challenge, Anna Turns says: “The support we’ve had from local companies has been amazing.  Salcombe Distilling Co. is being really pro-active and, as well as being one of our much-valued sponsors, co-founder Howard and some of the team will be joining Ella and I on our paddle on the 8th June.”  Anna continues: “We’re also delighted that they are sponsoring the ‘A Plastic Ocean’ screening as this is a really important, powerful documentary that will hopefully inspire the community to make further changes.”  The Plastic Clever Salcombe ‘Paddle & Pick’ coincides with World Ocean Day, which is on Friday 8th June, and finishes with a gathering of supporters at the South Sands Hotel in Salcombe on the Saturday afternoon.  Saturday 9th June is World Gin Day so very apt to be celebrating the end of the challenge with a Salcombe & Tonic!

Salcombe Distilling Co. is also sponsoring the ‘A Plastic Ocean’ film screening on Tuesday 19th June, which is taking place at Cliff House in Salcombe.

Salcombe Gin is produced in South Devon by Salcombe Distilling Co.  For more information visit www.salcombegin.com, email ilovegin@salcombegin.com or call 01548 288180. To keep up to date with the latest news follow @SalcombeGin on Twitter and ‘like’ SalcombeGin on Facebook.