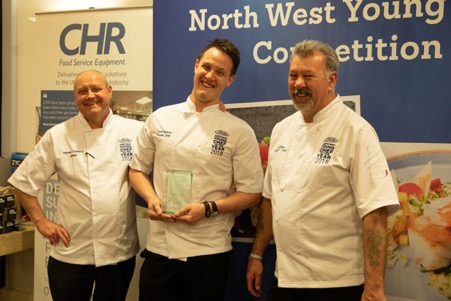 A promising senior sous chef from Cheshire’s luxury Carden Park Hotel has scooped the title of North West Young Chef for 2018 in a tense six-way cook off, held on the 23rd of May at Cheshire College – South and West.

Mai Trising of the Black Swan Hotel in Kirkby Stephen, cooked his way to the runners-up spot.

With ‘local’ and ‘seasonal’ the key watchwords of the competition, Cyril – making his second appearance in the competition – was praised by judges for his dogged determination in returning to the fold, his methodical approach and good handle of flavour.

On the win Cyril said: “It was a hard day for all of us, real pressure and a hot kitchen, but I’m so happy to have come through as winner.

“For the Final I submitted a more challenging menu than the one carried out in the semi-final as I wanted to push myself and show more skill. I was nervous in the lead up because of this but once I got in the kitchen and started cooking, the nerves fell away.”

As well as the coveted title, Cyril will receive £500, a weekend for two at Cheshire’s The Mere Golf Resort & Spa, and an automatic qualification into the semi-finals of the Craft Guild of Chefs’ Young National Chef of the Year competition, where he will square off against the best young chefs from the rest of the country.

Brian Mellor said: “Yet again the technique on show across the board has been excellent, this was one of the hardest competition’s we have ever had to judge, but in the end, Cyril’s consistent quality shone through. There was also real passion, pride and endeavour on show – something we’ve come to expect from the competition, but should never take for granted. We will be flying the flag for Cyril, come the national semi-finals.”

A well-attended inaugural dinner and awards ceremony was also held to mark the competition.

Brian added: “Special mention must go to Cheshire College for hosting the event. It was great to see so many people come out to support the young finalists. Thank you also to each and every one of the catering and front-of-house students who helped on the day – a truly inspirational group of young people and the next generation of this fantastic industry.”

The Finalists in full:

The North West Young Chef Competition is sponsored by CHR, Sousvide Tools and Essential Cuisine, and calls on chefs to produce a restaurant quality, three-course meal for two with an emphasis on the very best of local and seasonal produce.