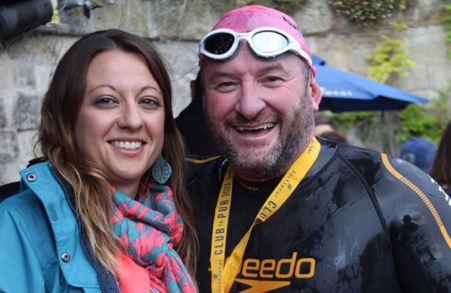 The annual Henley Club to Pub Swim is returning for a fifth year on Saturday 21 July, with support from local brewer and pub operator Brakspear, who are once again encouraging swimmers to cross the finish line with the promise of a commemorative beer, Two Bells, and a post-swim barbecue at the end point, the Angel on the Bridge pub.

Already, 570 swimmers have registered for the swim – compared to only 350 at the same point in 2017 – so it looks set to be the biggest yet and is firmly established on Henley Swim’s summer calendar. The 1.5km swim is suitable for swimmers of all levels and is an ideal introduction to open water swimming.

Brakspear will be brewing Two Bells, a 3.7% ABV golden ale, at the Bell Street Brewery. A bottle is given to every swimmer as they emerge from the river, along with a race medal incorporating a bottle opener to offer instant refreshment. The beer takes its name from the challenge set to swimmers to complete the course between the 7.00 pm and 8.00 pm chimes of the bells at St Mary’s Church.

Two Bells will also be on sale on draught during July at the Angel on the Bridge only. For every pint sold, Brakspear is donating 10p to Sue Ryder, the charity partner to the Club to Pub Swim.

Brakspear chief executive Tom Davies said: “A swim in the Thames, a party at a riverside pub and a refreshing local beer are the recipe for a perfect summer’s evening in Henley, and it’s no surprise that the Club to Pub Swim has become such a popular event.

“As a business with long-established roots in Henley, we’re delighted to support the event, which has developed into a showcase of all that is great about our town, and is now attracting swimmers from far and wide as well as locally. ”

Brakspear business development manager and Club to Pub swimmer Gavin Mansfield said, “I joined Brakspear in May last year and completed the Club to Pub Swim in the July – so you could say I was thrown in at the deep end!  Joking apart, it was a fantastic, inclusive event with a great community feel;  the fastest swimmers were after a time, but many more were just enjoying an open water swim on a summer’s evening. The organisation and support on the day were brilliant and I’m looking forward to this year’s swim – and the beer at the end of it, of course.”

The Club to Pub Swim starts at Henley Rowing Club and finishes at the Angel on the Bridge, taking swimmers first up upstream to Marsh Lock and then downstream to the pub.

Entries are open now for the Club to Pub Swim in a number of categories at: www.brakspear.co.uk/swim