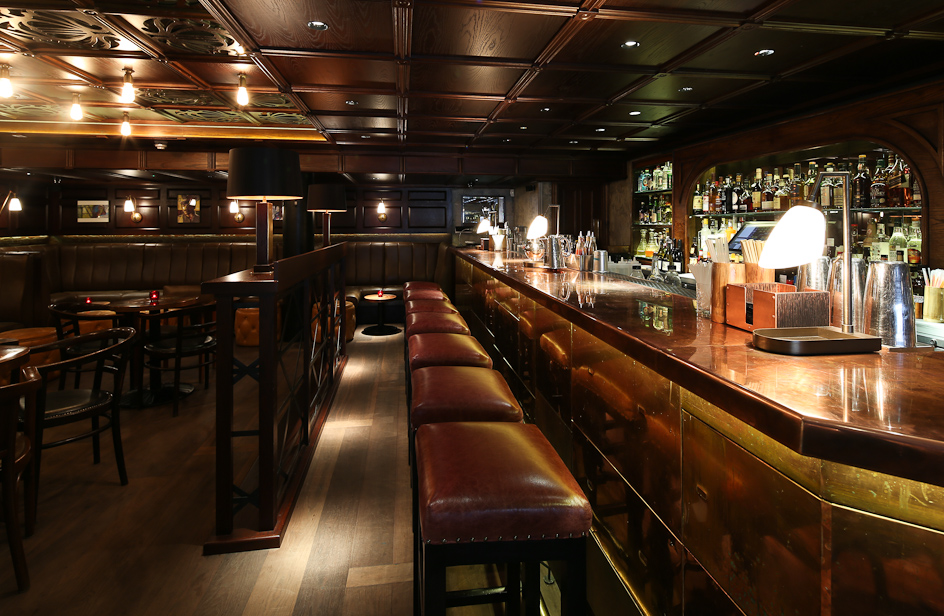 A tale of success. This month, On-Trade Progress visits The Blind Pig to talk a rather unusual cocktail offering.

Now children’s stories and cocktails may seem like two things you’d never consider pairing, but the bar team at The Blind Pig, the award-winning bar above Social Eating House has done just that. This spring, the team decided to launch ‘The Long and Short Great British Tails’ – a cocktail offering that blends beloved children’s stories with cocktails, meshing them together to create innovative and bespoke drinks that truly delight – its second menu of the series.

Perhaps I’m biased, but I was immediately overwhelmed with such an offering, perusing the menu, parts of my childhood jumped out at me. The Hungry Caterpillar, Winnie The Pooh and Peter Rabbit are just a few of the classic children’s stories adapted into cocktails. In fact, the former is compiled of various colour alcohol-infused ice cubes stacked on top of one another to give the impression of the caterpillar itself. It’s clear that there has been an extremely methodical approach to these creations to create a true parallel to the character and feel of the stories mirrored.

“We launched volume 1 last year and found that the nostalgia attached to the stories in the menu evoked a feeling of happiness and comfort, which is what we want all our guests’ experiences to be built around those emotions,” explains Jay Doy, group bar manager of The Blind Pig, reflecting on the first children’s stories theme menu released. “The drinks we as a team liked the most and felt worked the best were to drinks where the flavours were based on food items in the stories. As we work a lot across The Social Company with British food flavours and ingredients in cocktails, we wanted to take this concept further and build on the sensory experience. For volume 2 we chose only stories that were about food, had a strong food pull or made multiple references to food. We then worked on getting those flavours into the drinks and the garnished they are served with. We also created a ‘perfume’ for all the drinks that would either compliment the drink/food flavours or refer to the story.”

Of course, it takes a lot of planning to develop a stellar line up of cocktails and for this, The Blind Pig team came together to get creative.

Doy comments: “For the new drinks we started with the stories we wanted to work with, identifying the food elements in them and then we looked at how that would best be expressed in the drink. For example, when we decided to make a drink based around ‘The Tiger Who Came To Tea’, the first building block was the tiger’s milk ingredient. Tiger’s milk is a spiced/seasoned citrus marinade used for Ceviche. From there we created a drink based around Peruvian flavours and our interpretations of their ingredients, and we based the serve around a tea party/afternoon tea.”

Picking the stories to produce was no easy feat, but for Doy and the team, they wanted to focus on stories written by British authors. “As part of a restaurant that focuses on British ingredients we chose to work with British authors only,” Doy explains. “Picking which stories was down to the food and drink connections we could find in them. The flavour of each drink is supposed to represent food or drink items from the stories, so many of the ingredients are either from the story or are our interpretations of them. We weren’t quite sure what a snozzcumber tasted like, but we gave it some thought.”

The experience of ‘The Long and Short Great British Tails’ moves beyond the cocktails though and into the general experience of The Blind Pig.

Doy continues: “The menu covers were designed to look like old fashioned hardback books, and we updated the food menu offerings and design, and we put together a whole new wine list to compliment the drinking culture we were trying to promote. Most importantly, we looked at and updated how we serve our guests and include them in the experience. We are way more interested in what happens outside of the glassware. The drinks and the menu are an invitation for people to try us out, we want them to return for the human element of the bar.”

If anyone knows about the “human element” to the bar experience, it’s Doy, who has been with The Social Company, under which The Blind Pig and The Social Eating House operate, for 18 months, and the group bar manager for six. He has an unconventional approach to hiring too.

He explains: “When I recruit staff for the Blind Pig I don’t ask for CVs and references. I ask people to send me an intro to themselves and why they want to work in our team, and then we select the people on their personalities. Bartending is easy, being a good host isn’t.

“There is a hierarchy, and we empower the staff at different levels to not only train those below them but to also be accountable for them. My work ethos is that nothing is as fun or rewarding as work, and it isn’t done for fame and money. I try to encourage the bartenders to understand that mentality so that everything they do is because they believe it is the right way, not just because they were told to do so. The bar only works if the staff love it and want to invest in it.”

The Blind Pig brings elements of wonder and excitement with its latest cocktail offering and fuses a nostalgic experience with true quality.

“It’s my favourite bar in London,” concludes Doy. “It’s exclusive without being restrictive. It’s fun and casual while taking what it does seriously. We want customers to feel like it is their own hidden gem where they know the staff and they receive a unique and individual experience. All the team have backgrounds in different styles of bars and we pool that knowledge and experience to create the bars atmospherics.

“The combination of a good restaurant and a good bar is easy, making all the components of that building work well together is what makes the Blind Pig stand out. The Blind Pig is successful because the staff are given the freedom and are empowered to treat it like it is their own bar. If they love it, they will look after it and teach everyone else to love it too!”