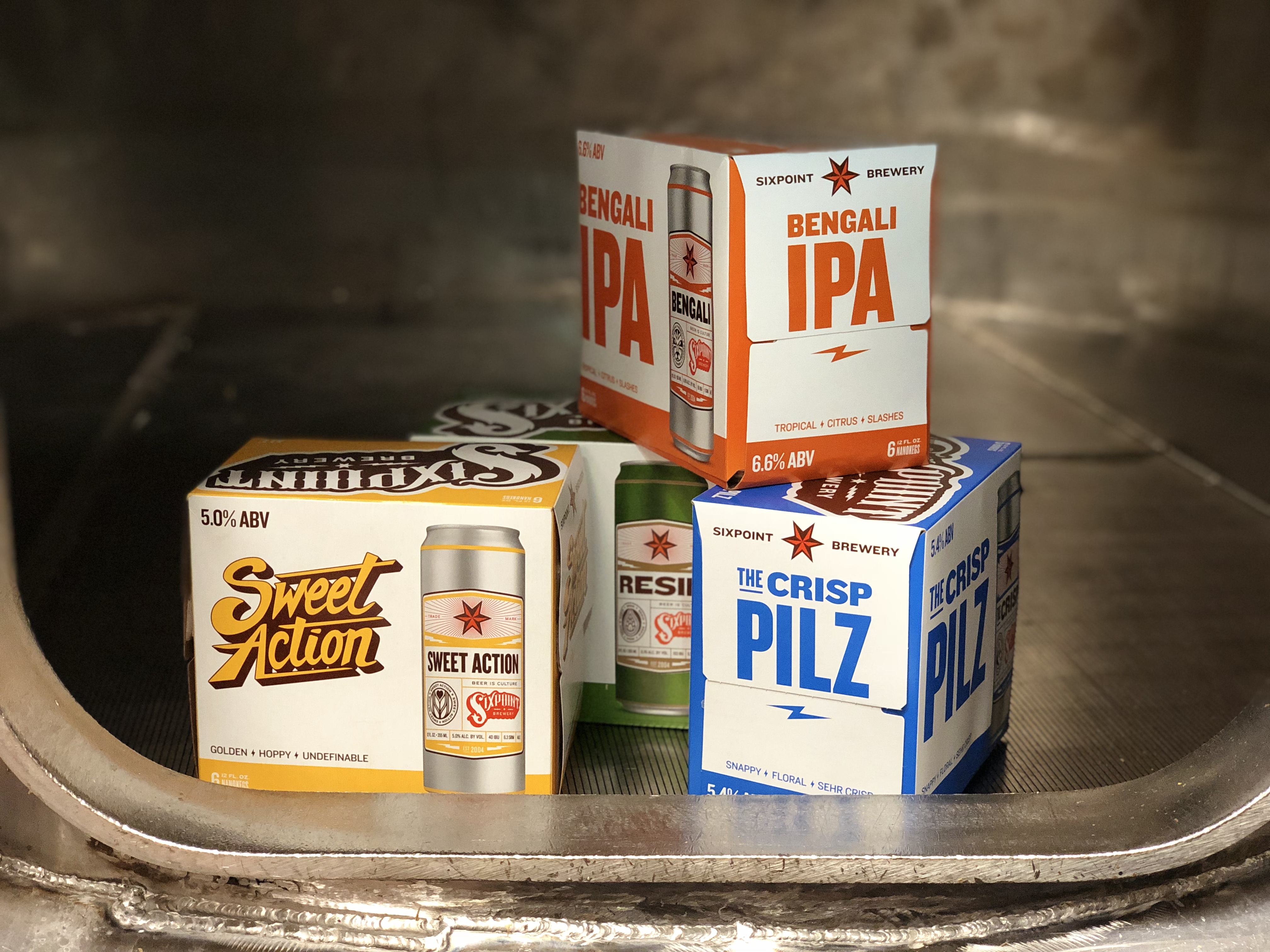 Sixpoint Brewery, a top 50 US Craft Beer Company from Brooklyn, New York City, is launching full-scale in the UK through importer Heathwick.  Sixpoint is known for their wildly innovative and brazenly hoppy beers, along with top notch ingredient sourcing.

Sixpoint is the most established brewer to join the Heathwick portfolio and will bring excitement and interest to the importer’s portfolio of innovative American craft breweries.  Heathwick will be launching and distributing Sixpoint’s diverse core craft beer range as follows:

Sweet Action 5% ABV Ale – Since it’s part blonde ale, part wheat beer, and part pale ale, you might be wondering, what exactly is Sweet Action? Sink one… your palate just gets it.
Golden, Hoppy, Undefinable

The Crisp 5.4% ABV Pilz – Legit pilz has a hop aroma that leaps from the glass—The Crisp blasts you with a huge floral aroma, but finishes crisp, clean, and refreshing.
Snappy, Floral, Sehr Crisp

Bengali 6.6% ABV IPA – Bengali is that go-to IPA you want by the pint. Big tropical hop character upfront, super clean, with a dryness on the back end that leaves you wanting more. So-named because the foam rings on the inside of the empty glass resemble tiger stripes.
Citrus, Tropical, Slashes

Resin 9.1%  IIPA – Resin slaps you with serious unfiltered dankness—sure it stings, but it feels so good at the same time. It’s hop candy up front, but drinks super clean for the size of the beer.
Dank, Hop Candy, Blast Off

Limited editions and seasonal specialities will follow in due course.

Graham Richardson, general manager of Heathwick, comments:  “The national launch of Sixpoint in the UK is one of the most exciting and biggest US craft beer launches in years. We are thrilled to have such a well-established and highly regarded craft brewery as Sixpoint join our portfolio and will be predominantly focusing on building awareness of Sixpoint through events, MTBs, social media and festivals, launching with Craft Beer Rising in London this month.  Sixpoint may be familiar with some craft beer lovers due to its present limited availability and following, but we’re going to bring the full potential of the brewery to the UK to feed the continual thirst for quality American craft beer that shows no sign of abating.”

“The UK has an incredible beer culture and history that served as a bridge for many of us into craft beer and was the inspiration for many early Sixpoint beers. That’s part of why it’s been so gratifying to see the reception of our beers over the last few years. We get a ton of fun messages from people in the UK raving about Resin and Bengali, going wild over the aromatics and potency. Now we go next level—we’re going to send a broader variety of beers and even start sharing some rare and specialty stuff. Our expansion gives fans the ability to take our beer home with them for the first time, as well as have a proper pint of draught across the UK.”

Sixpoint was born out of an 800-square foot garage in Brooklyn, New York City, in 2004 by award-winning home brewer-turned-professional Shane Welch, who had amassed over 1,000 individual homebrew recipes.  The brewery’s name is derived from the ancient six-pointed brewers’ star, which had symbolically adorned the walls and equipment of ancient breweries since at least the Medieval period.  Sixpoint’s motto is “Beer is Culture,” to highlight the human trajectory – the earliest human civilizations were founded upon the cultivation of cereal grains for making beer.  Sixpoint aims to perpetually inspire the art, creativity and collaboration generated through beer by acknowledging the history of the craft, while forging ahead to inspire culture in a modern setting.