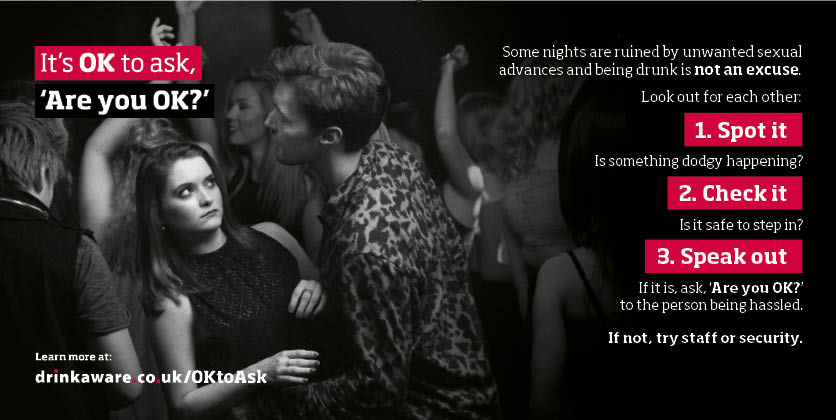 New research from Drinkaware reveals the extent to which drunken sexual harassment has become an accepted part of a night out for many young people, as the alcohol education charity launches a new campaign, ‘It’s OK to Ask’, that aims to address the problem.

The survey, carried out by the charity and YouGov, questioned 18-24-year-old men and women who drink in bars, clubs or pubs.  72% of respondents said they had seen sexual harassment* on a night out. 79% of women said they expected inappropriate comments, touching and behaviour to take place when they went out – either to themselves or to their female friends.  And 63% of women and 26% of men said they had been on the receiving end of some form of sexual harassment themselves.

‘It’s OK to Ask’ is being rolled out in cinemas, on the All4 digital channel, on line and in venues across the North West, chosen because of the high proportion of people in the 18-24 age group in the region who binge drink.

It encourages witnesses to drunken sexual harassment to challenge the status quo by giving them information and advice on what to do if they see or suspect that someone is being harassed.

Venues and operators can help by supporting bystanders and by making it clear that that drunken sexual harassment will not be tolerated on site.  Drinkaware’s Alcohol Vulnerability Awareness e-learning course and Drinkaware Crew can also equip staff to recognise and deal with harassment and other situations where people are vulnerable on a night out.

Drinkaware chief executive Elaine Hindal said, “Drunken sexual harassment is seen by too many young people as part and parcel of a night out. The aim of the ‘It’s OK to Ask’ campaign is to empower people to challenge this behaviour.

“Operators can play their part by supporting bystanders who come to them for help and by taking the issue seriously, helping to foster a positive and safe social environment where drunken sexual harassment is not tolerated.”

‘It’s OK to Ask’ is part of Drinkaware’s ongoing ‘If You Wouldn’t Sober, You Shouldn’t Drunk’ campaign and was developed with input from a number of experts including Hollaback’s Good Night Out campaign and the Suzy Lamplugh Trust.

One of the young people interviewed for the campaign was Lucy Harrison from North London, who stepped in when a friend was being sexually harassed earlier this year. She said, “We were in a club and there was one particular guy who wouldn’t leave my friend alone.  She made it clear she wasn’t interested, but he grabbed her bottom and kept coming back, like he saw it as a challenge.

“I stepped in and spoke to his mates, who defended his behaviour and said he was just very drunk. That’s not an excuse – if you wouldn’t do it sober, you shouldn’t do it drunk! It completely ruined our night.

“It’s great that Drinkaware are taking this issue on and sharing what people can do if they witness drunken sexual harassment – it really can make all the difference. I wish I’d had this advice when I was younger. It would have been a lot of help!”